The livestock industry uses animals daily and works side-by-side with death. The trapped animals mean death if humans stop feeding them. Inappropriate treatment is abuse, and animals are suffering from mistreatment. The situation is determined by the livestock farmer’s one arrangement, one consideration, one lazy heart, one action without courage, and the animals are all under the dominion.

When these two things are considered together, livestock farmers must prepare for disasters much more than usual, and in the event of a disaster, they should probably realize that they are responsible for the number of animals they keep, meaning thousands or millions of times more than the usual. When one chooses a very responsible profession called animal husbandry that exploits animals, one cannot escape from that responsibility.

Looking at some cases, neither the current livestock industry nor the officials in charge recognize the responsibility, and therefore everyone notices that every time a disaster occurs there is a great deal of animal sacrifice.

Before giving these case studies, we pray for the safety of the animals and the people in the disaster area, and pray for recovery as soon as possible.

Due to Typhoon #15, which landed on Chiba Prefecture on 2019/9/9, power outages and water outages occurred throughout Chiba.  As of the 19th, there are still areas with power outages. Various items of reconsideration are being reported, but in livestock farms where numerous animals are reared, the damage involved many lives and were devastating.

Because livestock animals are viewd as commodities to begin with, they are the first to be abandoned.

We can’t write details because we don’t know the situation, but the pig farm employees in this video muttered:

He must have been a kind employee who kept repeating how poor the pig was. He gave water to the pig when we asked for it (surprised there wasn’t…).
However, that this was a human-made disaster is forgotten.

Apparently a poultry farm that has decided to go out of business has been reported *4. They seem to have been using battery cages, but what happened to the chickens…? Sounded like many animals died due to heat and humidity without fans turning. Even before disasters, it should be acknowledged that the modern animal husbandry itself, where animals are stuffed in air-tight spaces, is a problem *5. If the animals themselves were free outdoors, they could find cool places, dig holes, and escape. However, it is very difficult staying in an air-tight space where the air does not circulate. If you imagine being trapped in an elevator or a crowded train without the fans turning, you might be able to imagine the degree of suffering.

In addition, we have summarized past cases of disasters to farm animals.

When the tsunami was coming, the animals could not be rescued. After the tsunami left, the pigs who ran away were killed.

After the Fukushima nuclear power plant was damaged, the animals were left behind and numerous animals starved to death. Although some cattle barely survived, many farmers chose to slaughter them to get security deposits. Meanwhile, some cattle farmers have entered the alert area every day to continue to take care of the cattle. Many animal protection groups have entered the alert area to rescue animals, and the Animal Rights Center was also helping, so there was nothing that could not be done. Some families did not evacuate because they could not abandon their dogs.

Many people say that human life is important, but it was not a natural disaster but a human disaster that attacked livestock animals. What were lacking in the farmers who starved the animals was preparedness, a sense of responsibility, and a little courage. We cannot accept the deaths of the magnificent animals we saw at that time. 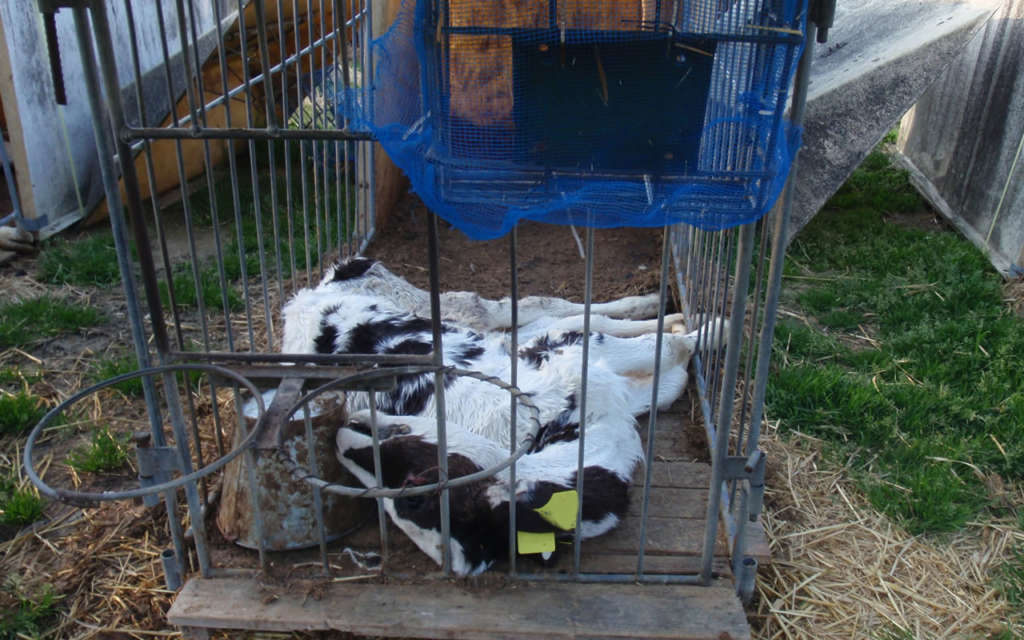 Born in Tochigi Prefecture on 2010/12/30, this calf came to Fukushima Prefecture one month before the earthquake, was locked up in a crate, and starved to death. The bucket was flipped over and surrounded by the green grass that could not be reached. The 3-month-old baby was alone, could not touch the next baby cow, could not comfort each other, and passed away. The death confirmation was made the following year and seems to have been neglected until then. 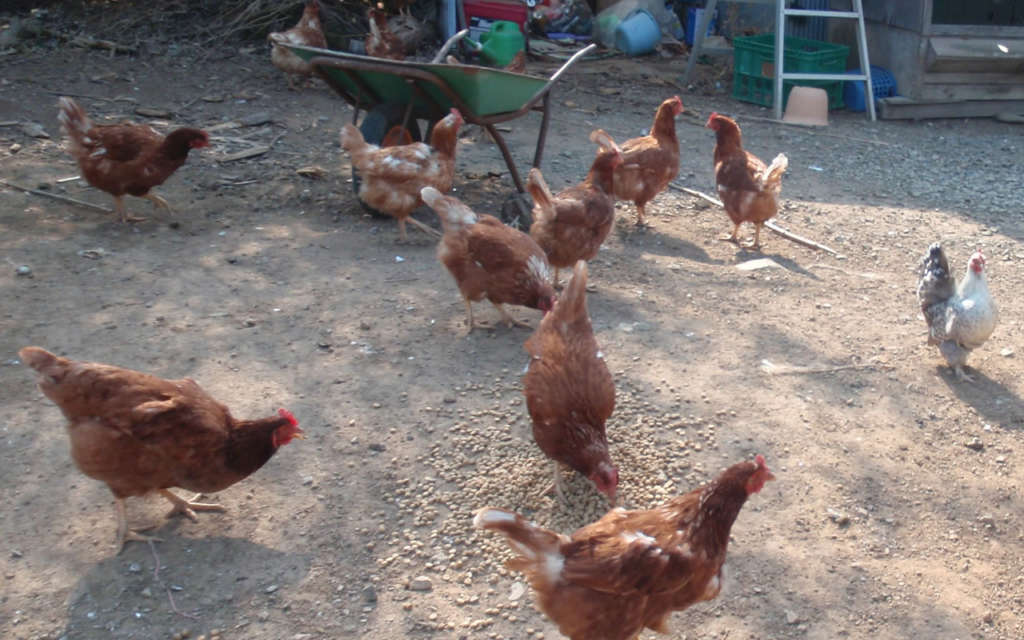 Many of the chickens roaming in the yards were still alive.

There were reports that pig shacks broke down due to the earthquake and the pigs died *2. Of course many of them died in misery and suffering. They may have broken their bones or fell into grooves and starved. There seemed to have been other poultry shacks caught up in soil and sand. However, it was power outages and water outages that increased the damage caused by this earthquake.

If the number of cows was small, they could have been milked by hand without problem, but the current dairies in Japan rear a large number. So they would be milking with machines, but if the machines don’t operate, the cows will suffer from breast tension and pain. There may have been a cows with mastitis *3 and killed away. Apparently water and food intake restrictions had been implemented because they could not be milked. They should have had emergency power supplies, and planned for water shortage from well water or nearby rivers.

In interviews, farmers have said “This will affect the meat quality”, “Milk may not come out”, “Have to think about how the remaining guys (pigs) can be turned to meat” and we believe there aren’t just these kinds of livestock farmers, but from these interviews we can’t sense responsibility for animal welfare or lives *1.

Following this earthquake, Hokkaido has created a disaster prevention manual. However, the precedence did not seem to have spread all over the country. It does not seem to be utilized in the damages caused by Typhoon #15 of September 2019.

During negotiations with Kanagawa Prefecture, Animal Rights Center has been asking for years for what is written below. However, the response of the prefecture remains consistent, saying they will monitor the trends of the nation… Several years have passed without sensing any willingness from the livestock sector representative to take measures.

We’re not asking for anything big, just the obvious, and the minimum.

In the Great East Japan Earthquake and the Kumamoto Earthquake, the damages to industrial animals and delays in countermeasures have been pointed out. Effective disaster countermeasures have not yet been formulated in any prefecture. Measures have not been taken due to the huge number of industrial animals, and animals tend to be left unattended, we request recognition that leaving them unattended is an abusive situation that greatly violates the spirit of animal welfare, and requires countermeasures, cooperation with other regions and other businesses, and cooperation with the government.

1) The Kanagawa animal welfare management promotion plan states “We will share information with related organizations about handling in the event of a disaster”; the record of what information was shared and how should be presented.

2) Each producer and industry group should be instructed to formulate a voluntary disaster plan.

3) As a minimum, the government should formulate methods and procedures for euthanasia in the event of a disaster. The euthanasia method used at that time should be a painless one that uses a method that takes away consciousness in advance and also has an anesthetic effect.

In view that thorough consideration of animal welfare methods and dissemination of the significance of animal welfare to workers lead to reduction of mental burden on humans as well as animals, as a painless method, a manual for the prevention of epidemics related to animal welfare should be developed, referring to “On-farm killing for disease control purposes” by the Humane Slaughter Association.

Meanwhile, the Ministry of Agriculture, Forestry, and Fisheries has stated that it’s left to each prefecture. The Ministry of the Environment seems to be only interested in pets.

When the Ministry of Agriculture, Forestry, and Fisheries was inquired, it was left to each prefecture to deal with disaster measures for farm animals. On the other hand, Kanagawa Prefecture, where the Animal Rights Center continues to negotiate, responds that it will look at the national trends.

However, the consequences have become the worst in any disasters anytime, so the government must take the lead in taking measures. The pig shack that collapsed this time was a pig shack that you’d expect to collapse… It is necessary to take a coercive measure, assuming that the victims are in most cases the farmers who are suffering from weak economic power, not spending money on mitigation, and not gathering sufficient information.

MAFF should indicate specifically in detail what kinds of methods are available, and the Ministry of the Environment should acknowledge the animal welfare issues that are even worse than with pets and materialize the animal welfare management promotion plan.

And most of all, it must be made sure that the farmers don’t have more animals in their hands than they can handle.

This kind of sacrifice will happen again in the next disaster.
If you continue to pay for meat, eggs, and dairy without any doubts about such an industry, there will be no improvement and the sacrifices will continue. 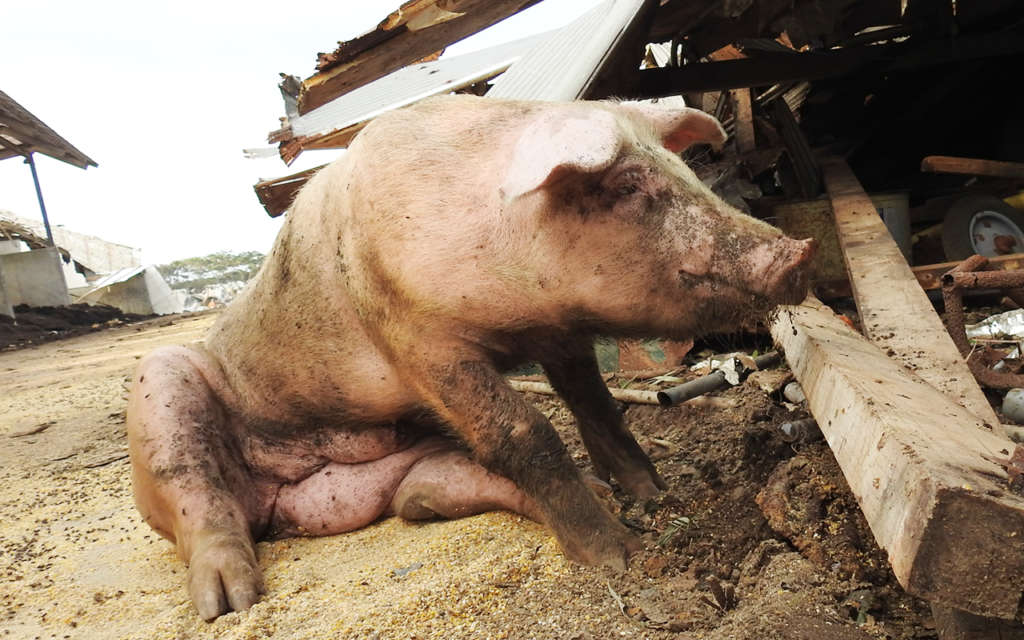 Sinful Aquariums - Breeding dolphins while Many of Them Die