Japan’s animal welfare, why it’s so behind

ホーム » Japan’s animal welfare, why it’s so behind

We will answer questions from people who wonder “Why is animal welfare in Japan so far behind the world”.

Reason 1: In the first place, Japan’s animal agriculture is behind

In Japan, there was no animal agriculture to begin with.  It began to spread from prewar to postwar, and the technology related to animal agriculture, let alone animal welfare, has been introduced late.  Whether factory-style animal farming or the cruel in-line slaughter lines, they came in late.  Today’s terrible animal farming technology that restrains animals was only imported from the West.

Animal welfare is lagging equally.  And that delay is gradually widening, like 30 years, 50 years.  For example in the EU in 1974, animals (at that time only hoofed kinds like pigs, cows, sheep, goats) were required to be stunned before being slaughtered, but Japan still only has loose regulations that do not apply to livestock animals.

It seems that the word animal welfare just barely spread half a century ago.

The term animal welfare just barely beginning to spread in Japan is also like Europe half a century ago.

Japan’s export of livestock products is very small.  It is not an exaggeration to say that it is almost nonexistent.  We just barely export some eggs to Hong Kong recently.  Some people might question about wagyu beef, but annual beef import was 615,409 tons while export was 4,339 tons, which is only 0.7% of the import *1, and according to FAO statistics, the amount of the world’s beef trade is 8,631,318 tons, so it is not a volume that the world market cares about.

Japan has had almost no pressure about animal welfare from the world market.

China is different.  Thailand and Brazil are also catching the trends of the world to sell livestock products to the world. (It’s not that more export is a good thing.)

Since Japan has dealt only with people who live in Japan, the low awareness of the consumers is reflected in the terrible treatment of the animals.

Reason 3: Because animal farming including slaughter is viewed as taboo, keeping a lid on it in fear

Japan’s unique religious attitude of not wanting to “take life” rather than killing animals, is torturing animals.  The long-standing human rights issue in Japan (the issue of Buraku people being discriminated against) has also been one of the reasons for ignoring the existence of farmed animals.

However, tabooing slaughter does not mean that the process is gone.  Certainly meat products, eggs products, and dairy products are evidence of killing animals, and although they are something to put in one’s mouth, for some reason people turn a blind eye to the production process, don’t want to make improvements.

However, if the current situations are not known, there will be no improvement.  If one thinks someone else will just solve it, that would be too naive.

Instead of fearing something and avoiding discussions, we must disclose the problems of animal farming hidden by the consumers’ wish to not see, and solve each and every issue.

Reason 4: Because the issue is wrapped around an obscure term Animal “Loving Protection” Law

The only binding law in Japan that protects animals is the “Act on Welfare and Management of Animals”. This was originally a law on animal protection and care, but in 1999 protection was replaced by loving protection. Well well, it’s impressive that a term that no one can define could become a law.  Because of the term “loving protection” that gives the impression that having love is important, the tendency to protect likable animals has strengthened unfortunately.

This seems to be a major reason why the development of laws for livestock animals and laboratory animals are lagging behind.

Reason 5: Civil movement is too weak

Sad to say ourselves, but Japan has the issue that the civil movements are too small and weak.  The situations of the billion animals weren’t understood, and corporate activities weren’t monitored, allowing corporations to do whatever they want.  The weakness of NGOs means that truths that are inconvenient for corporations, businesses, and governments are hard to surface. Japan is in a difficult situation as it is said that journalism is also overpowered by the forces.

* In the field of animal protection, there is a significant power if speaking of only dogs and cats.

Japan’s consumers are unaware of animal welfare.  Consumers include producers, people in the meat industry, people in companies that handle food, politicians, and government officials, too.

After all, the above reasons 1-5 are all tied to this ignorance.

Because of not understanding animal welfare, people can’t discuss, blame others, try to make into a priority issue, think it’s irrelevant to themselves, or say they don’t want to see.  In addition, the consumers are easily fooled by largely meaningless government-promoted guidelines called “Rearing Management Guidelines corresponding to the idea of Animal Welfare” that ignore animal welfare.

This way, we keep lagging behind the world standard.

It’s not because “there is no land”!

It’s often heard that it’s because Japan’s land is limited, but that’s not the case.  For example even in China, 7-story pig houses and 9-story pig houses are built to save land.  Japan is also newly exploiting forests to construct huge livestock farms, mainly in the Tohoku and Kyushu regions.  Lack of land is only in areas with high land prices in cities like Tokyo, which is the same in any country.

However, in areas where private houses are nearby, land even if it exists often cannot be used due to complaints from neighboring residents.  That’s understandable, because they’re huge, packed with animals so they smell strange, and sometimes abnormal cries are heard.

The photo shows the land under development for livestock that suddenly appears among the forest in the Tohoku region in 2019. More and more holes are being developed in forests like this. 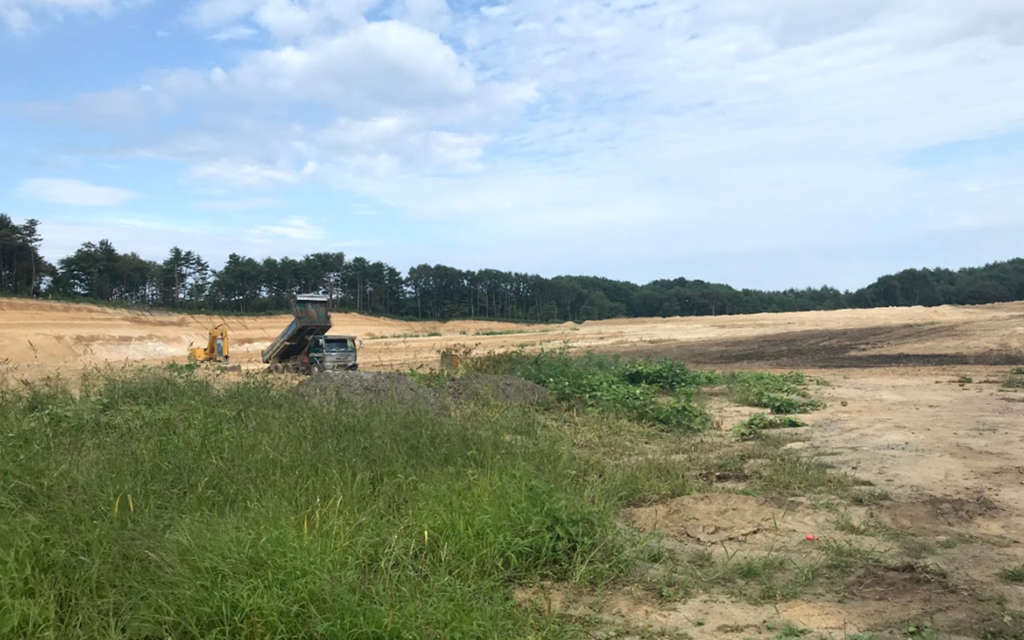 There may be various other factors.  The climate in which whistle-blowing is unlikely to occur, and the national characteristic that trusts corporations too much, etc.

However, Animal Rights Center Japan tries our best to investigate the situations and publish information.  Throughout Japan, many people who strongly desire to change the situations are making the effort to proactively inform people.  Animal Rights Center Japan and THL Japan are speaking to companies one by one.  Many media, politicians, companies, and producers are beginning to listen.

We definitely have the power to change society.  And it is changing little by little.  Let’s accelerate it.
We need the cooperation of every additional person.

[Slaughterhouse in Japan] Tether too short to even lie down, tied overnight without even water