Fur garment imports down 43% from last year. Down 89% from when the campaign began!

The 2000s were really terrible.  Everyone had animal fur around their necks.  In 2006, fur garment imports peaked and as many as 21,331,530 fur items were imported.  This means in one year, 20 million people purchased fur garments.

The campaign against fur was launched in the wake of an investigation video showing the actual situation of the Chinese fur industry released from late-2005 to 2006, and a march against fur began in the same year 2006.  Actions in front of stores, simultaneous campaigns around the world, letters and requests to companies, public outreach, whatever we could do, the movement continued to spread.  Demonstrations marches were held simultaneously in 12 regions, and joint campaigns were carried out with organizations in east Asian countries. 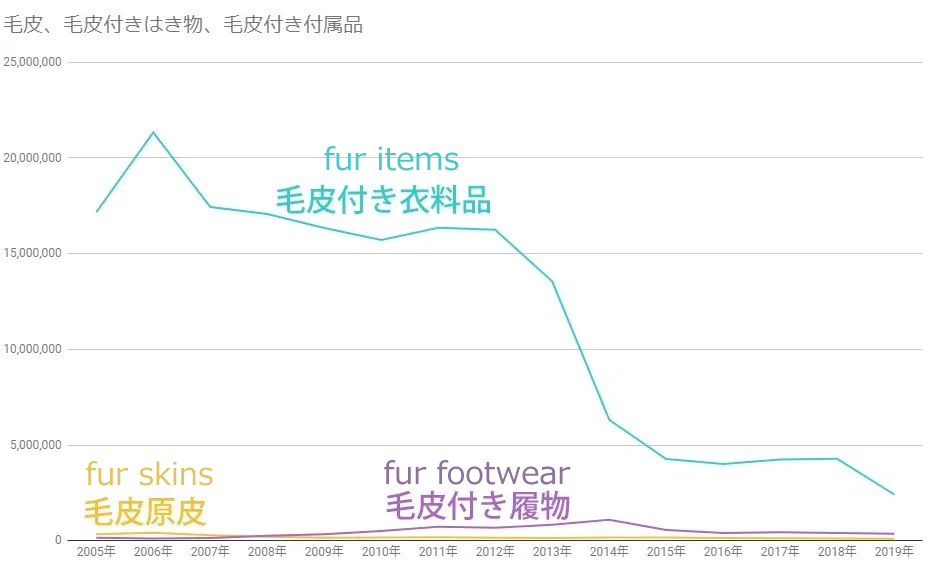 Looking at the trends in imports by sector, we can see the fur industry’s struggle.  Women’s clothing has been declining since 2006, but trends have been created through the use of parts such as shoes that are not obviously animal fur, and clothing for uninformed men has continued ups and downs.  Still, these little attempts are no longer working.  It’s declining in all areas.

Compared to the when the campaign started, the number has declined considerably, but animal sacrifice is still high.

1,034,149 animals*2 were sacrificed for Japanese consumption.  Still more than a million.

We want to make this number zero.  We must.  Even right now, animals tremble in cages, behaving abnormally, in fear and despair, are being bred again in the spring, to endure the heat of summer, and will be killed.

Until the sacrifice of animals becomes zero, please lend your hand.

Please ask companies to decide not to handle real fur at all.

Remedies are there, the world is moving, Japan please follow! Broiler chicken welfare