Website documenting the 50 days of a broiler chicken: https://50days.jp

2020/10/7 Tokyo: Animal Rights Center Japan has exposed the hidden reality behind Japan’s broiler poultry farming for the first time, and has published the “50DAYS” website to inform the consumers, compiling videos and reports following the 50-day life of a broiler chicken from August 18 to October 7, 2020.  Today is the final day, when all 50 days of their lives have been revealed. 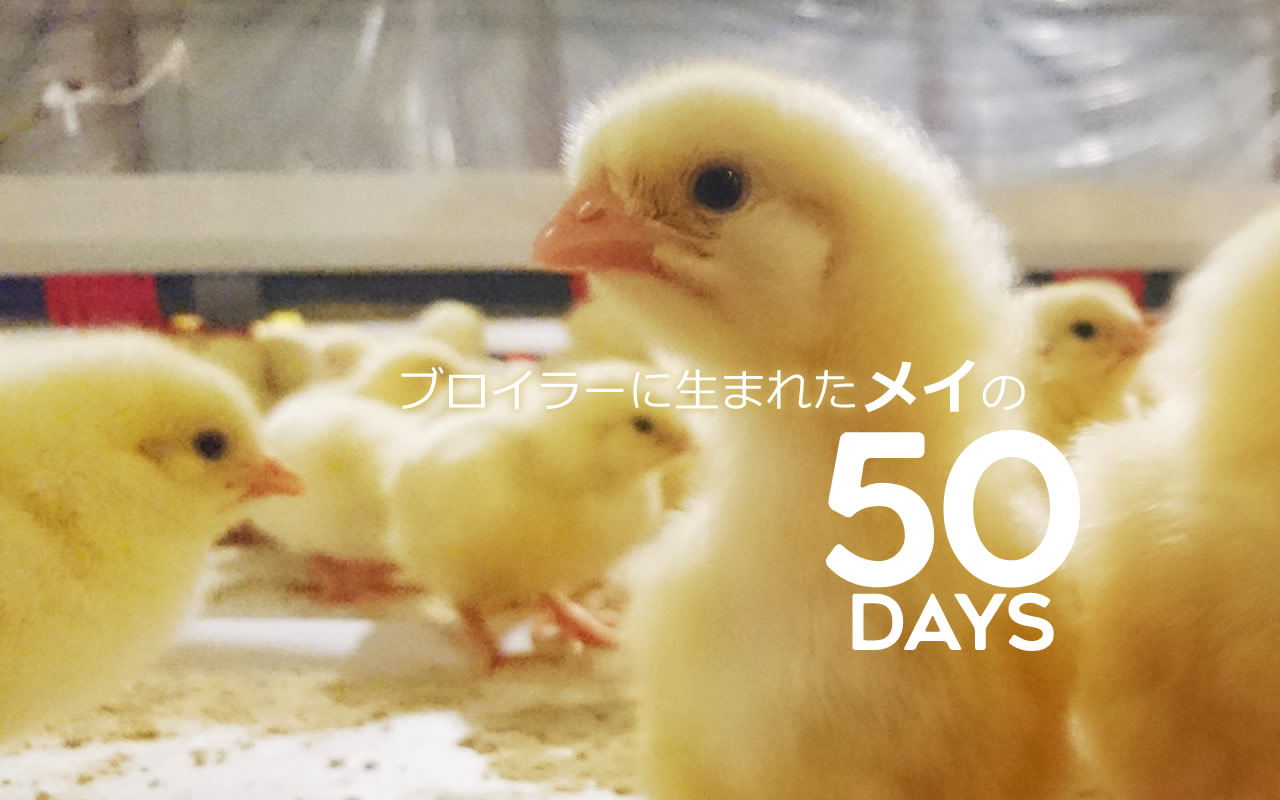 The world viewed by Mei the broiler

“Mei, a baby chicken, was born at a hatchery and was trucked to a farm. Mei and her mates were roughly tossed to the floor of the poultry shack.  Mei, who hit the water pipe and dropped to the ground, got up startled.  This was the day they were born.

Babies like Mei have the desire to peck something.  Such a desire could not be met at all in the poultry shack where nothing was prepared for pecking.
Employees make rounds through the poultry shack a few times daily looking for carcasses and weakened chicks. Each time, Mei and her mates run away. Sometimes employees step on the chicks. Internal organs would pop out from the buttocks and they flap their wings and crawl away. Dragging their damaged internal organs, they die.”

…Daily report on the lives of the broiler chickens for 50 days till slaughter. 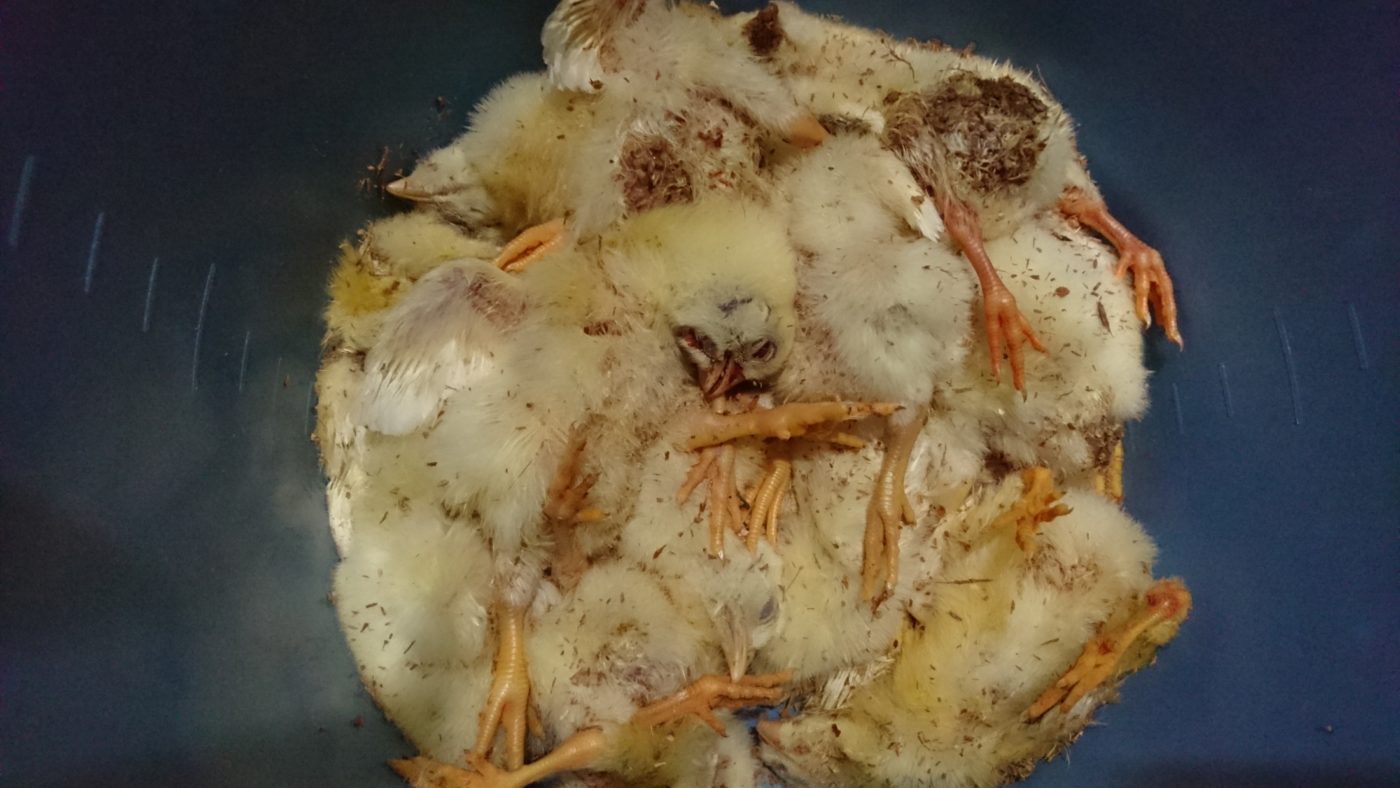 The source and intent of the internal survey

The information within 50DAYS is all factual. It is based on a detailed report from a former employee who worked at a poultry farm in Japan. This individual and we believe that knowing the truth is the first step toward a solution. This survey is not intended to criticize a single farm or company, and neither the farm nor the informant is identified. This is because while the reported farm is rather large, what is shown here is a poultry farm with breeding densities and methods typical within Japan. 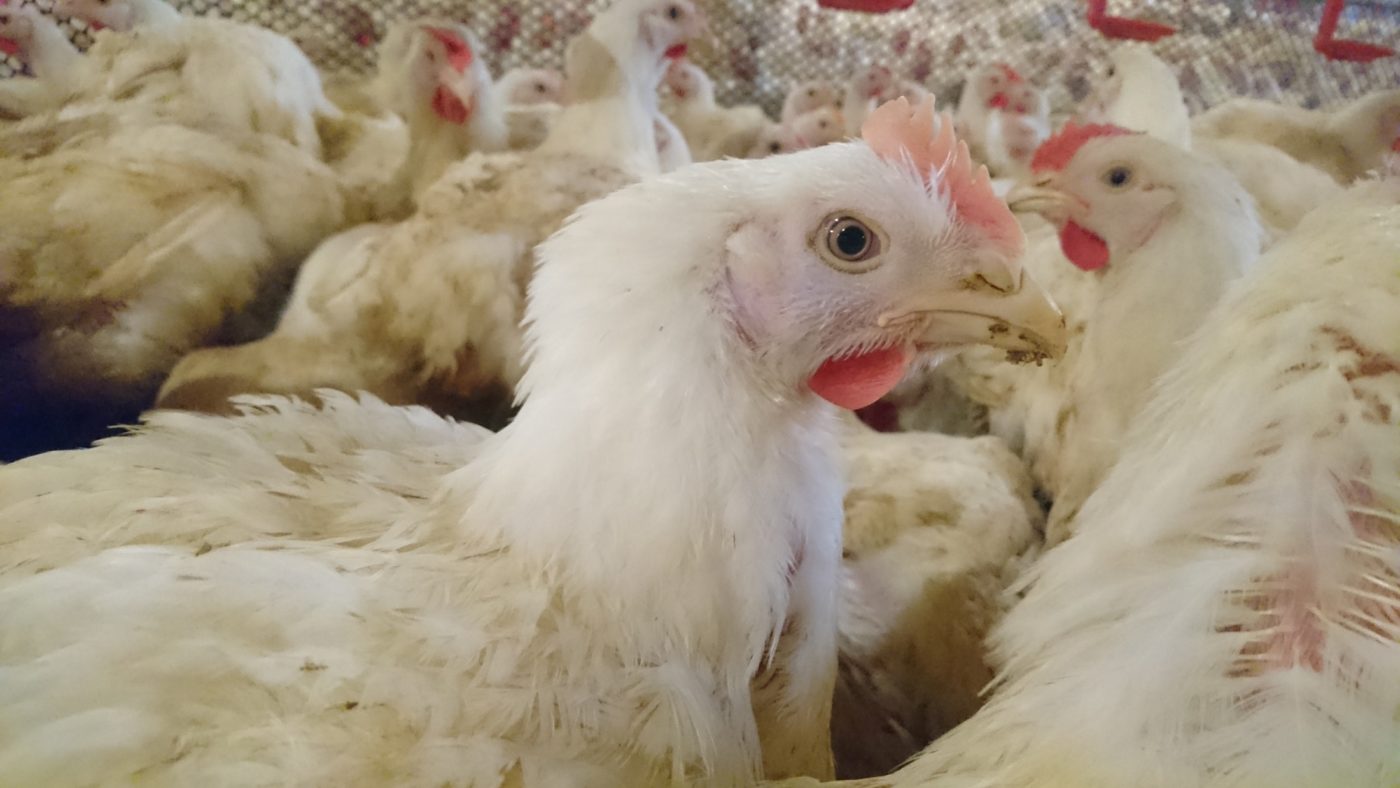 Problems with economic use of animals

The reality behind chicken meat production in Japan had not been revealed before.  Now that the situations of the chicks raised for 50 days to be delivered have been exposed, the hope is that the viewers realize that our consumption behavior, and the production methods, must be improved.

The former employee who has seen the suffering of the chickens first-hand says, “After all, as long as this poultry system exists, the problem will not be solved.”

Those who work in poultry farms are not the bad people. However, when a single person tries to manage tens of thousands of chicks at a price of US$5 per bird, the situation will necessarily be terrible. In fact, an employee said, “During the limited working hours, no matter how careful I was, I couldn’t move forward without kicking the chicks.”  Chicks who have been selectively bred to grow rapidly will suffer and die even if they were raised in a good environment.

This is the system of today’s poultry. Such a system is currently allowed because of the discriminatory preconception that chickens are ok to torture… because they are economic animals and are treated as if no suffering exists.

We have already acquired the technology to obtain delicious food without torturing animals. Switching consumption to plant-based protein (alternative meat) to reduce the breeding number is a much easier solution than animal welfare. From there we can finally raise the market price and take a step toward improving animal welfare. 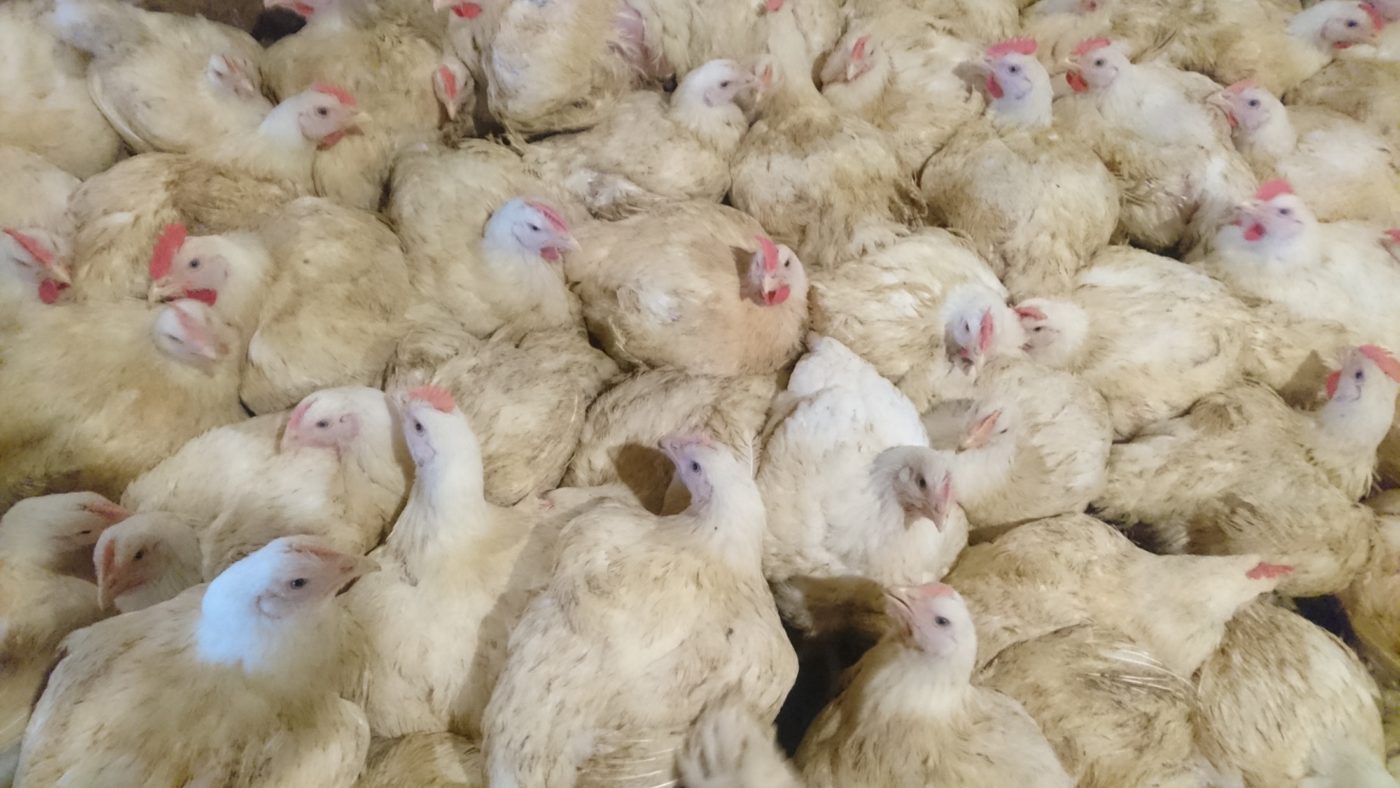 ■ Accelerate the transition to alternative meat, a hot topic in Japan

The one who funded the first cultured meat (clean meat) produced in the world was Google’s co-founder Sergey Brin with an estimated net worth of $30.6 billion. The reason he invested in clean meat was for animal welfare. Although chicken consumption is still increasing, imposing further burdens on the animals is ethically unacceptable.

The world is now beginning to transition from animal-based protein to plant-based protein. Japanese meat and food companies are also following the lead.

The breeding environment in Japan is clearly inferior compared to those in Europe, the US, Brazil, or Thailand. The average breeding density of broilers in Japan is 50-56 kg/㎡ (50-56 kg worth of chicks per square meter). Broilers in Europe/USA are slaughtered when they reach 2 kg after 42 days, while broilers in Japan are slaughtered at 3 kg after 50 days. This 8-day difference is significant; they would spend the final days in over crowdedness, on filthy ground, and in conditions of worsening physical abnormalities.

In Europe/USA, the switch to slow-growing chickens has begun, but there is no such movement at all in Japan.

In addition, already 345 companies in Europe and America have made the “Better Chicken commitment”, which promises to reduce the breeding density to 30 kg/㎡, switch to slow-growing species, provide enrichment like perches and pecking materials, and adopt gas stunning for slaughter.  They are to switch by 2026, while in Japan there is no prospect for improvement.  This is not just an animal issue however.

A survey by the Ministry of Health, Labour and Welfare has already shown that chicken produced in Japan has a higher detection rate of drug-resistant bacteria than imported chicken from countries like the US, Thailand, and Brazil. The situation has reached the point where drug-resistant bacteria are detected in over half of the Japanese chicken sold on the market.

With 10 million people expected to die from drug-resistant bacteria by 2050, improving farm animal welfare and raising animals in environments where they can maintain their own immunity is essential for the sustainability of society. However, the Japanese government does not recognize the connection between farm animal welfare and drug-resistant bacteria.

We demand that broiler poultry that forces such cruel rearing and continues severe selective breeding be ended as soon as possible, that companies shift to alternative meat, and at the same time rapidly shift to Better Chicken that accounts for animal welfare.

Although not completely at the level of Better Chicken, Japan’s “jidori” chicken is one of our recommendations because of its regulation on the breeding density (not the branded chicken).

This campaign lasted 50 days. Someone who watched their short lives said, “I wished they could be put to death soon.” An industry that is unbearably cruel is not ok. The resulting meat cannot be called ok, either. However, 695 million chicks under similar captivity are born and killed every year in Japan.

We sincerely hope that their situations get improved as soon as possible. 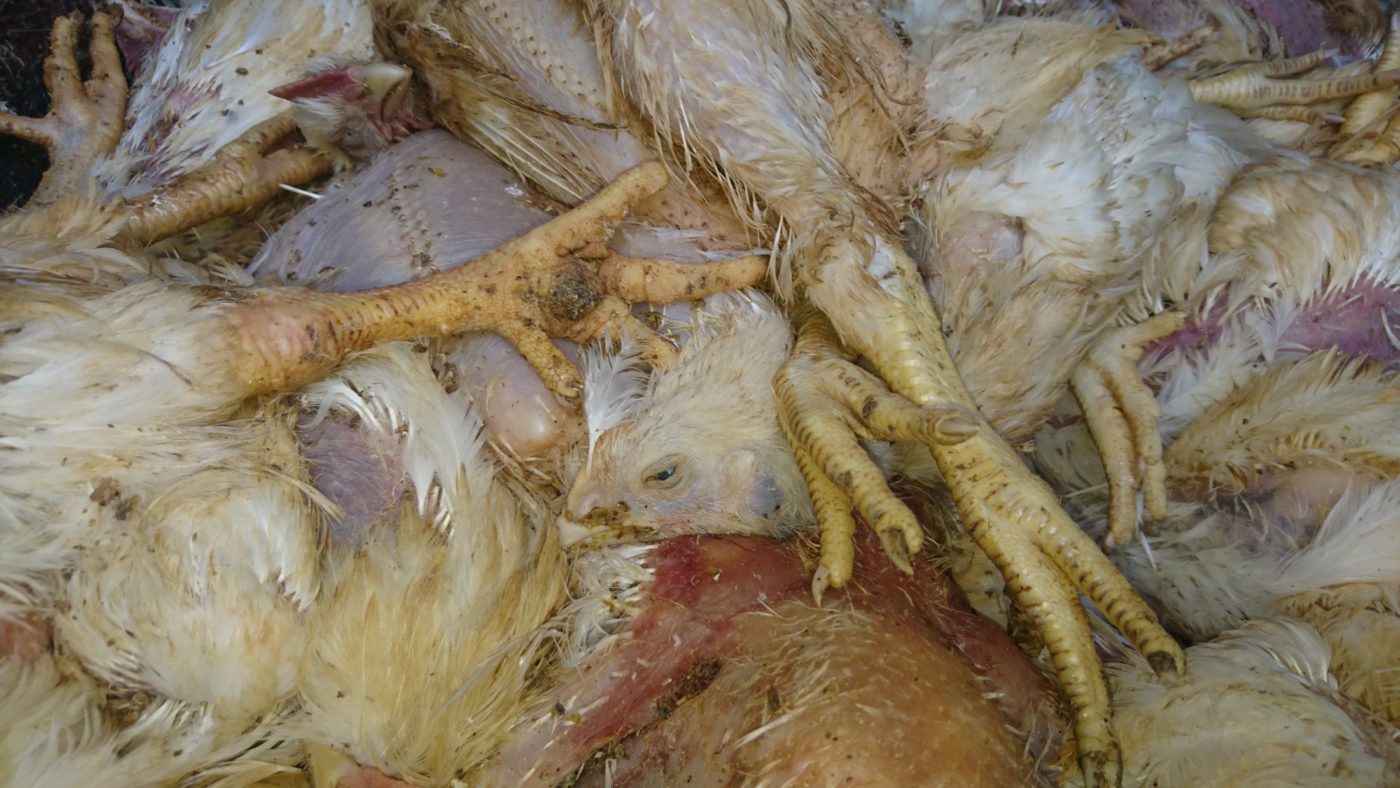 Is chicken meat really healthy? The truth compared to beef and pork