End cruel treatment of animals at slaughterhouses in japan
https://goo.gl/ky5o7D

This video was filmed in 2015,Japan
Please share this problem people around you.

● Carried in trucks, terrified cows are kicked from the truck, their tails are twisted or even crushed to force them to move.

● In order to make pigs move, stun-gun are used excessively.

● Pigs suffering from disease are left for an extended amount of time, then hung by the leg and dragged away.

● Animals that are carried to the slaughter house in the afternoon are not fed and are butchered the next day. They are not even given water. (They are seen drinking dirty water from the ground while they are being washed)

Cruelty and inhumane actions towards animals at slaughter houses is not the responsibility of individuals. It is an issue of the system.

We request the government to make an effort in stopping animal cruelty.

At the least individuals and slaughter house should be made aware of  the OIE Terrestrial Animal Health code.

*This photo is this taken in 2015 Japan.
These are pigs in a holding pen waiting to be killed in the adjacent slaughterhouse. 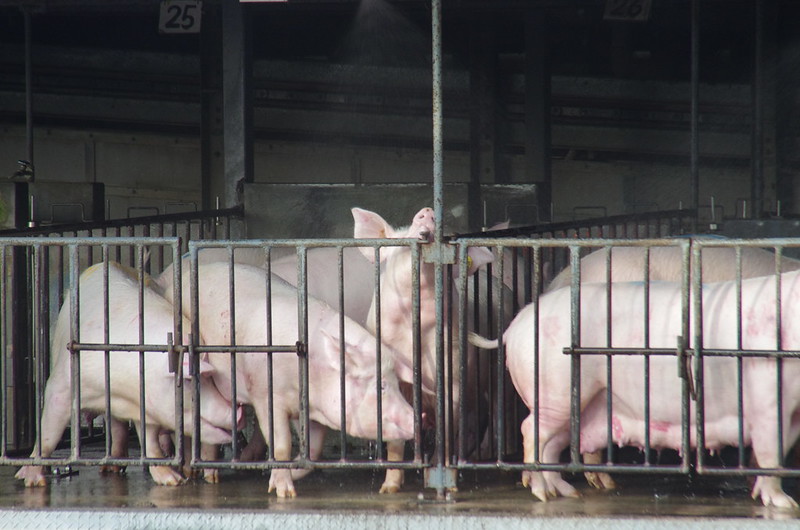 ● “…mammals and ratites which are not taken directly upon arrival to the place of slaughter should have drinking water available to them from appropriate facilities at all times.”

● “Animals which have not been slaughtered within 12 hours of their arrival should be fed, and should subsequently be given moderate amounts of food at appropriate intervals.”

● “Under no circumstances should animal handlers resort to violent acts to move animals, such as crushing or breaking tails of animals, grasping their eyes or pulling them by the ears.”

● “The throwing or dropping of animals, or their lifting or dragging by body parts such as their tail, head, horns, ears, limbs, wool, hair or feathers, should not be permitted.”

● “Electric goads and prods should only be used in extreme cases and not on a routine basis to move animals. The use and the power output should be restricted to that necessary to assist movement of an animal and only when an animal has a clear path ahead to move. Goads and other aids should not be used repeatedly if the animal fails to respond or move. In such cases it should be investigated whether some physical or other impediment is preventing the animal from moving.”

● “Painful procedures (including whipping, kicking, tail twisting, use of nose twitches, pressure on eyes, ears or external genitalia), or the use of goads or other aids which cause pain and suffering (including large sticks, sticks with sharp ends, lengths of metal piping, fencing wire or heavy leather belts), should not be used to move animals.”

● “Injured or sick animals, requiring immediate slaughter, should be killed humanely and without delay”

Slaughtering without Stunning in Hokkaido