On 2020/11/5, avian flu broke out at a poultry farm in Kagawa Prefecture for the first time this winter. Since then, bird flu has spread to Fukuoka, Hyogo, Miyazaki, Nara, Hiroshima, Oita, Wakayama, Okayama, Shiga, Kochi, Tokushima, Chiba, Gifu, Kagoshima, Toyama, and Ibaraki, and the number of killing is currently (2021/3/10) 9,689,703 birds.

We doubt that anyone thinks this poultry depopulation for bird flu, requiring killing all poultry on the farm in a short time (as a guide, slaughter within 24 hours, carcass processing [buried and incinerated] within 72 hours) in view of “preventing epidemics”, would be euthanasia, but for the record we’d like to point out that it’s a massacre, not euthanasia.

The video shows depopulation at a duck farm where bird flu broke out this winter. Does it look like the birds are being euthanized?

We were able to confirm the slaughter process from the beginning to the end twice. In each case, the birds were stuffed into a container, gas was injected, the lid was placed, and then the lid was opened and the carcass was moved to a sealed pail bin.

Not a specialized “gas killing equipment”

When killing animals by gas, one generally needs to use a dedicated gas killing equipment that is tightly sealed, has an interior concentration reading, and has a transparent window that allows one to see what’s happening inside. However, only blue containers are used on bird flu outbreak farms. They’re just containers used in food factories, meat factories, fishery processing plants, etc. With such things, euthanasia is far from being realized.

The gas used is carbon dioxide, but CO2 gas killing is not easy. It is known that there is no immediate loss of consciousness and there is an aversion among poultry. Argon, an inert gas that poultry does not dislike, should be used if there is any consideration not to cause suffering, but probably because of its “high price”, such a gas with less suffering won’t be used. Even with CO2, it is possible to alleviate the suffering by injecting CO2 at a low concentration first and then switching to a high concentration, but such culling equipment with “staging” ability is not prepared in the first place. Just containers or buckets like in the video.

Not gas killing, but death by suffocation or crushing?

As you can see in the table, 70 large ducks and 130 small ducks are packed in a container at once. Looking at the scene, the duck packed near the end was about to jump out of the helicopter of the container. From this, it was found that the ducks were packed in a heap in the container. But what does the OIE (World Organization for Animal Health) Terrestrial Animal Health Code, which Japan is a member of, say in Chapter 7.6, “Animal Slaughter for Disease Control”?

As you can see in the table, 70 large ducks and 130 small ducks are packed in a container at once. Looking at the scene, the ducks packed near the end were nearly overflowing from the side of the container. From this, we could see that the ducks were packed fully in the containers. However, what does the Terrestrial Animal Health Code: Chapter 7.6 “Killing of Animals for Disease Control Purposes” of OIE (World Organization for Animal Health), which Japan is a member of, say?

Containers or apparatus should not be overcrowded and measures are needed to avoid animals suffocating by climbing on top of each other.

Even moving ducks get put into sealed containers

After the gas injection, you can see from the video that one of the ducks who was moved from the container to the pail bin showed wing movement. The epidemic prevention worker also saw this duck asking, “Oh?”, But he continued to work without trying to return this duck to the container. Don’t know if he thought “I don’t care anymore” because the duck didn’t have the energy to run away and was weak and dying. In any case, it’s no surprise that something like this often happens at the scene of bird flu depopulation. Even looking at every corner of the video, there is no such thing as “careful consideration for each bird” or “respect for life.”

It will also depend on the ethics of individual epidemic prevention workers. As far as we could see, there were two ducks who were found alive after being moved to the pail bin and were returned to the container, both done by a worker. This person also seemed to be politely checking to see if they were dead when moving to the pail bin. Also, the process of putting the ducks in the container did not show evidence of “throwing them in” that was seen in other epidemic prevention workers. But not everyone is like that. Culling is done within 24 hours, and carcass processing (burying and incinerating) is done within 72 hours. Speed ​​will be prioritized in the work, and if one continues this physical work for a whole day, it will inevitably become sloppy toward the end.
In any case, birds still suffer regardless of whether individual workers have ethical standards. Getting returned to the container will expose them to another suffering anyway.

Roughness of the procedure

The ducks are being grabbed at the base of their heads, but how is this? The photo below is posted on the website of HSA, which studies how to kill livestock animals with less suffering, saying, “ducks may be caught and gently lifted by the base of the neck for a minimal time”. Practical Slaughter of Poultry Ducks
It seems possibly incorrect to hold at the base of the head, but this needs to be investigated further.

The video shows ducks being thrown into containers, but throwing animals is a mistake, needless to check. 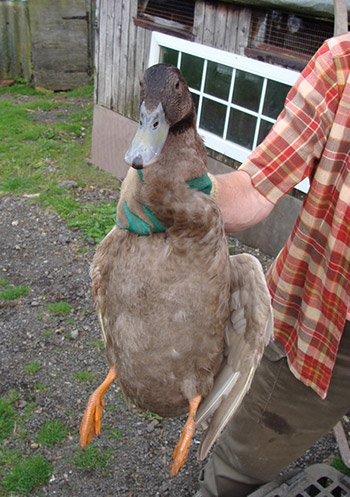 To not contribute to bird suffering, what can we do? The answer lies in our daily dining table.

Bird flu has been spreading along with the industrialization and expansion of farms. Consumption of livestock products derived from poultry has continued to expand; if this continues, bird flu depopulation would not end.
However, if animal agriculture shrinks, that’s a different story. What should we do for that? It means reducing livestock-derived foods from our daily diet. This is the easiest and most effective method anyone can try.

Hakoniwa Farm, which learned about the situation of cage rearing and started cage-free rearing, is cage-free