Request to Ito Fishery Cooperative: Even for live captures, the sea becomes bloody and the dolphins die

ホーム » Request to Ito Fishery Cooperative: Even for live captures, the sea becomes bloody and the dolphins die

Immediate halt to dolphin drive hunting in Futo for the purpose of selling live bodies to aquariums!

In October 2019 Ito Fishery Cooperative in Futo area of Ito-city Shizuoka prefecture resumed dolphin drive hunting, which had not been performed for the past 15 years.

If it’s a live capture, it’s not cruel.

Based on such understanding, Ito Fishery Cooperative announced to the media the reopening of the hunt.

However, the truth is very different.

“Ocean-Dolphin-Human” released a video of live capture of bottlenose dolphins by dolphin drive hunting in Futo.


The dolphins driven to the Futo fishing port struggle in the net, panic and collide with each other, and the sea eventually becomes colored with blood.  Aquarium staff in wetsuits further chase dolphins in the sea filled with the dolphins’ blood, and several people hold them down and push them into stretchers.  The dolphin suspended by the crane twitches and struggles in the stretcher.  And when packed in a long, coffin-like container, the dolphins are exposed to the life-threatening risk of drying up, the fear from being boxed in, and the stress of transportation. 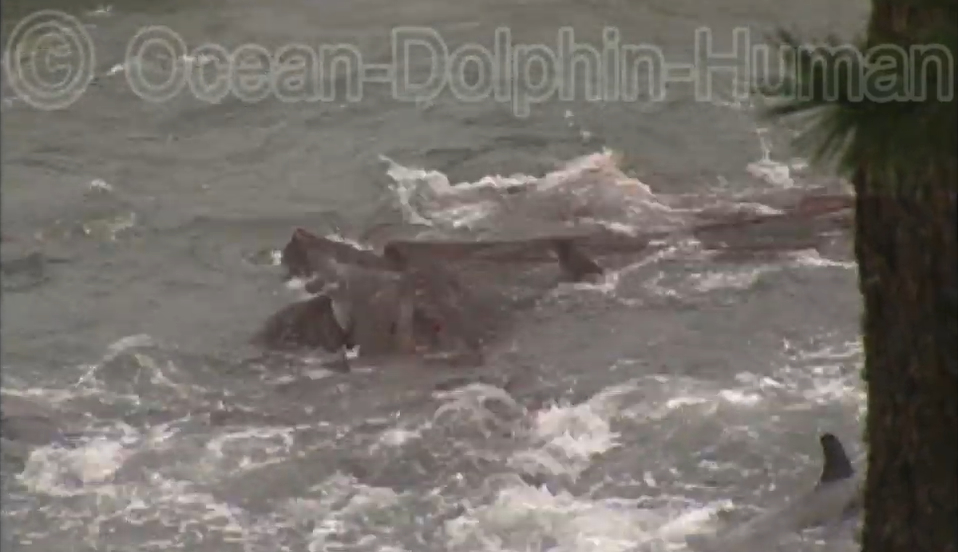 Dolphins purchased by aquariums are preferentially young, scar-less females.  Calm and easy to handle for shows, and use for breeding are the aim.  Taking away reproductive individuals from nature can harm the wild population.  Dolphin herds are mainly based on mothers, so the potential for forming wild herds is also deprived of.  This is a serious destruction of nature and ecosystem. 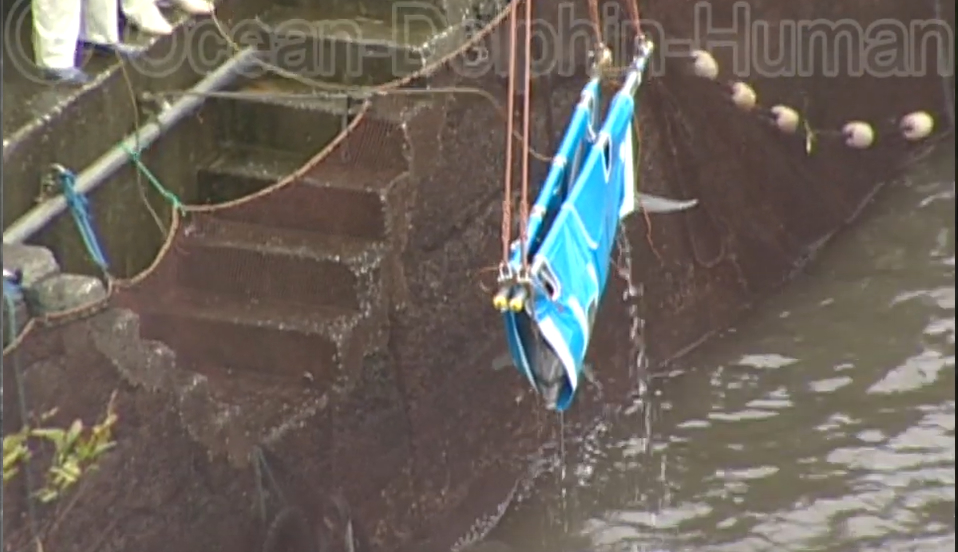 In 2004, they also killed some of them for food.  Even without such process this time around, there is no doubt that the situation is far from being “not cruel” as Ito Fishery Cooperative states.

According to the video, it is estimated that more dolphins died during the hunt than reported, as four were killed during the process apart from the purpose of research and food, and dead dolphins were also found on the sea floor during their capture.

Dolphins who are dismissed from being sorted for live sales and food-use are released to the sea, but dolphins who have lost their herds are said to have difficulty surviving.  For dolphins with tight family bonds of their herds, the sorrow and stress of getting their friends and family stolen in front of their eyes is immeasurable.

In the hunting method called dolphin drive hunting, metallic sounds are echoed in the sea and the fear from the wall of sounds is used to drive the dolphins.  Dolphins live in the world of sounds in the dark ocean, and sounds travel about 4 times faster in the water than in the air.  Dolphin drive hunting, which forces dolphins sensitive to sound into extreme fear and stress with metal sounds, is a cruel abuse in itself.

Dolphins naturally live in vast oceans without obstacles like walls.  Thus, there have been reports of deaths from shocks of being put into cages and stress of transport.  Also, when put into the aquarium tank, they first become afraid of the walls of the tank.  When a dolphin baby is born in the aquarium, the mother dolphin swims around in the tank with the child inside; she is protecting the baby from the tank wall.  This is a sight not present in nature and we can never say that it’s worth a smile.

Dolphins in the aquariums have experienced a number of severe stresses, including panic during capture, sadness of losing friends, transport stress, and fear of being placed in cages and tanks.  They are also used for dolphin shows and artificial breeding, and are destined to suffer from pneumonia and skin diseases in chlorine-containing pools.  Whether from the wild or artificially bred, their lives often end short, and it is important to not forget that dolphins also die on their way to the aquariums.

The released footage is from 2004, but once the dolphins are caught, the terrible sight will repeat again at Futo Fishing Port.

The aquarium business, which captures dolphins from the wild and uses them for recreation, should end.  In today’s world, where the sustainability of the global environment is under crisis, Ito City of Shizuoka Prefecture and Ito Fishery Cooperative should not tolerate or continue this.

Animal Rights Center Japan together with PEACE has sent a request document to Ito Fishery Cooperative, requesting termination of dolphin hunting and opportunity for discussion.

As animal protection organizations advocating for animal rights and aiming for a society with compassion for animals, we urge immediate termination of dolphin drive hunting in Futo of Ito-city.  We have heard directly from the Futo branch that there is no cruelty or opposition if the capture is for the sale of living animals instead of food, but we strongly oppose “consumption of wildlife”.

The hunting method that drives sound sensitive dolphins into extreme stress with metal sounds is itself abusive, and furthermore as someone involved in the drive hunting, you should be well aware that the dolphins panic from the fear of being driven and collide with each other, their blood flows in the sea, and that there are dolphins who die from the stress of the hunting and losing friends.

And the dolphins are first exposed to the life-threatening risk of drying up and the stress of long-distance transport, which at this stage can lead to death or weakness.

Also, dolphins naturally live in vast oceans without barriers such as walls.  Thus, they may die from shocks of being put in a fish cage, and after being transported to the aquarium they will first be afraid of the tank walls.  Being reared in small pools that don’t allow them to exercise their physical abilities or allow for the natural amounts of exercise is a great burden for the dolphins.  Furthermore in those small pools, they are forced to perform high jumps and unnatural acts that are completely different from their natural behaviors for the entertainment of humans watching and enjoying, and they are trained to eat dead bait (dead fish) from humans.

Also, unlike the ocean with natural purification effects, the water tanks promote pneumonia and skin diseases due to bacteria and mold, and there are many cases of deaths after several days of poor physical conditions.  Chemicals like chlorine that are put into the aquarium for disinfection, also afflict dolphins, causing clouding of eyes and peeling of skin.

Pulling dolphins with high sociability apart from families and herds they grew up with also causes them to suffer.  The longer they are kept, the longer they will be exposed to stress.  In fact, many dolphins die prematurely.  And people gain wrong knowledge from dolphin shows about the relationship between humans, animals, and ecosystems.

For these reasons, live animal capture and live animal sales can be said to be similar or even more cruel an abuse than capture for food, as well as ecological and natural destruction.  The reason that dolphin drive hunting in Taiji Town, Wakayama Prefecture, has been criticized worldwide is also due to the “consumption of wildlife”, which is the sale of living animals for the aquarium business.  Not only dolphins, but capturing of large mammals for the sake of display is itself becoming unacceptable internationally.

Criticism for dolphin capture, display, and dolphin shows are growing in the international community, and in fact, more than 200 organizations from around the world have joined to request the UNESCO International Geoscience and Geopark Program (IGGP) to cancel the “Izu Peninsula Geopark” designation in protest against the resumption of dolphin hunting in Futo (see the attachment).  Geopark accreditation was suspended at least once due to dolphin drive hunting.  If even one dolphin gets captured or killed in the future, these organizations shall not be silent.  The influence has spread throughout Izu, and the world’s perception will never be back to the beloved and gentle Izu again.

The image once damaged is irreversible as a tourist destination and we demand that dolphin hunting be stopped before such a blow.  In addition, we ask that you provide a forum for discussing this matter with us.

We look forward to your response to this issue.