2019 was a year with many natural disasters due to violent typhoons.  Animal Rights Center Japan has investigated livestock animals in the affected areas and saved records of them. 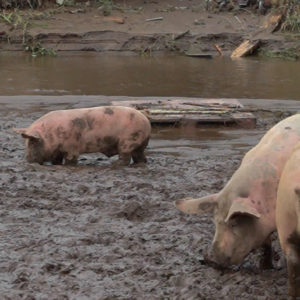 A 3-minute film “Don’t leave me” edited based on footage taken at those times received the Murakami Hiroyasu award (director of films such as “Tokyo Higata”) inithe 3-minute video corner at the Labor Festa (an event about documentary films, etc) held in Tokyo Tamachi Transport Hall on December 21.

(★ There are some scenes that are difficult to watch in the footage.)

It’s a small piece, but that the livestock animals in the affected areas are under miserable situations where they cannot escape even if they want to gave the audience a big impact, and the stance of Animal Rights Center’s activisms viewing social issues from different perspectives than humans, were evaluated.

All the pieces based on field surveys of livestock animals have been created with support of understanding by all of you members and supporters.  It’s thanks to this that our steady activities led to this award, which we’d like to celebrate with you.  Thank you for your continuing understanding and support of the activities of Animal Rights Center Japan.

Request to Ito Fishery Cooperative: Even for live captures, the sea becomes bloody and the dolphins die