Cow’s life – what you can tell from Individual Identification numbers

What is Cattle’s Individual Identification Number?

You may have seen “Cattle’s Individual Identification numbers” on packages when you buy Japanese beef at a supermarket.

These Cattle’s Individual Identification numbers are attached to cow’s ears as well as displayed on the meat package at supermarkets.

Since Bovine Spongiform Encephalopathy (BSE) was first observed in 2001 in Japan, there has been a huge demand of traceability about where the cattle were born and transported.
Thus, the Law for Special Measures Concerning the Management and Relay of Information for Individual Identification of Cattle came into effect in 2003.

* Per Article 6 of “the Law for Special Measures Concerning the Management and Relay of Information for Individual Identification of Cattle” the Minister of MAFF must publicly disclose items recorded in the Individual Cattle Identification using the Internet or another method.

The purpose of this law is:

In the past, animals were not cared for enough as only profitability was valued.
However, animal welfare is an important aspect to consider when implementing health development of agriculture businesses now.

Through these ID numbers, we can get a few pieces of information in light of animal welfare.

What we can learn from these Individual Identification numbers

Please check the information via Search Service of individual identification information of cattle” when you purchase domestic beef.

It is hard to imagine if you simply look at the tidily packed meat on a tray, but it was once a life full of emotions and sentient just like us before becoming “beef.”

They are male Holstein cows in the picture below. Female Holstein are used for milk, whereas males are raised for meat.

The cow on the right was born in March. The left one who is slightly bigger than the other was born in February.

They were about 3 months and 4 months old in the picture. 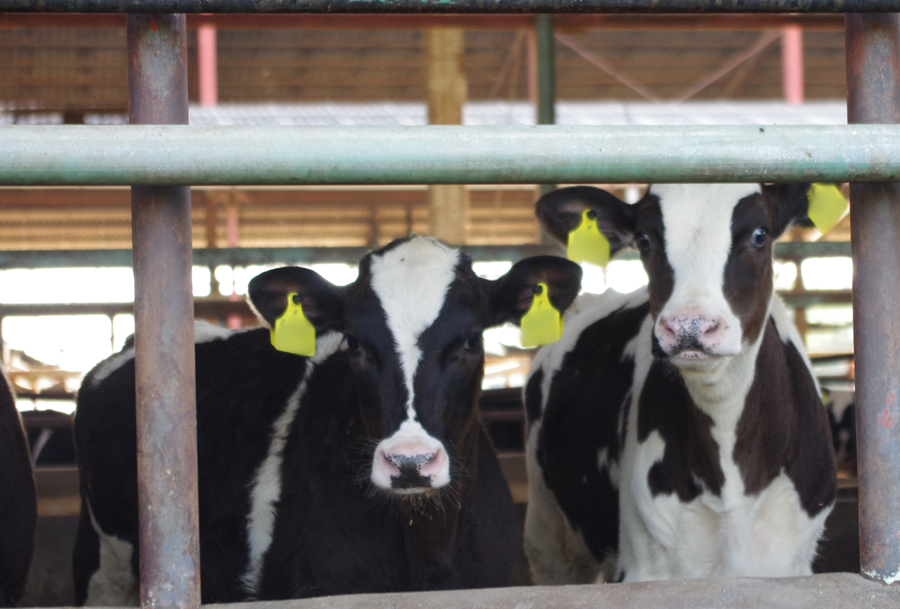 They were born at different farms but they came to this farm to be raised together.

After this, they went their separate way again.

The cow on the left was dead right after the transportation. His life was about 7 months long.

The cow on the right was slaughtered when he became 2 years and 2 months old. He had to transport for about 7 hours.

This cow is a wagyu beef cow. He is so small that his ear tags look too big. 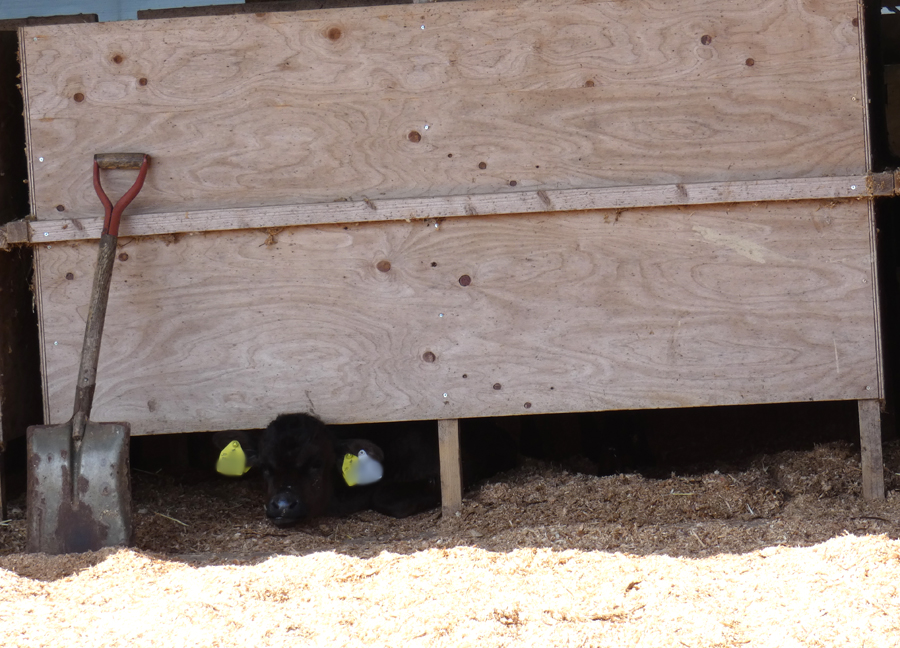 He was about a month old in this picture. He was separated from his mother and contained in a wood box.

Usually, mother cows breast feed their calves until they become 5-6 months old* so he must miss his mother.

In two months, he was deceased.

A rendering vendor, who reuse animal carcasses for fertilizers, took care of him.

He had only 4 months to live.

This cow was raised for milk. She is tied as most Japanese farmers do in Japan. 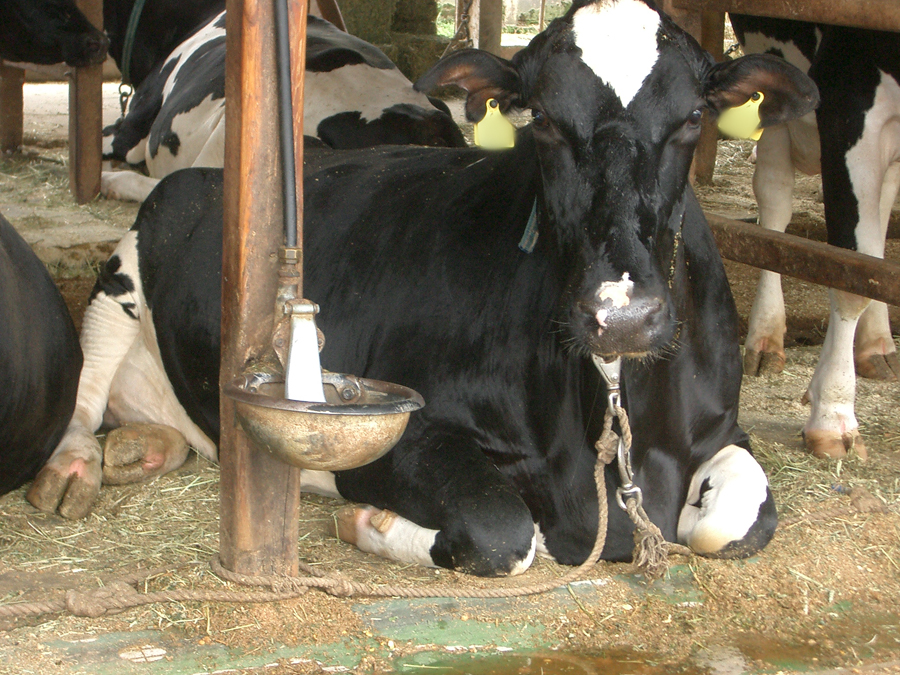 She was born in Hokkaido. Two years after, she was auctioned, and then got transported to the farmer in the picture above in the Kansai area. She was raised here for 5 and half years. Then, she was moved to a slaughterhouse after 3 hours of transportation.

She wasn’t killed on the day she arrived in the slaughterhouse, she was slaughtered on the second day.

The slaughterhouse didn’t answer about whether or not they have drinking water for cows. The cow would have not been able to drink water at all for a long time if there was no water.

Cows typically drink large amount of water so it would be really hard on cows if no water were provided.

Additionally, the breed that has been modified for milk usually produces 20 – 50 kg of milk a day. It creates pain if cows don’t get milked.

We presume the cow didn’t get to do so as there seem to be no slaughterhouses that practice milking the cows that are going to kill.

We wish the agony of these cows on their last days is as minimal as it could be, especially after having been exploited to produce milk for so long.

However, they are “call cows” and sold for processed food for low price unlike cows that are raised for beef.

We highly doubt proper treatment is given to these cows while they are waiting to be killed next day at slaughterhouses.

This cow was also raised as a milk cow. She was transported to a slaughterhouse at the age of 5 years and 7 months. 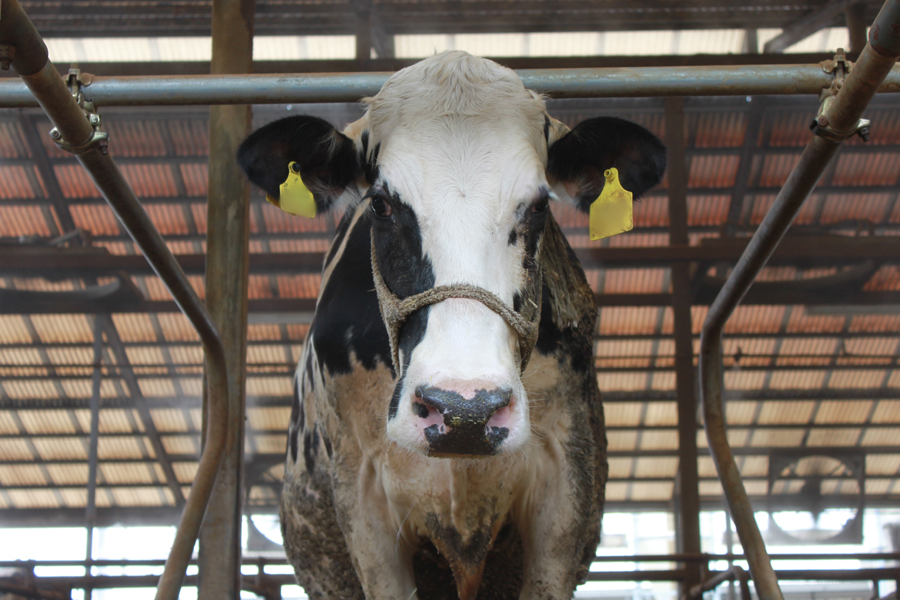 This cow got to spend her life in the same farm. She was not tied, either.

However, as you can see, her body is covered in dirt.

Her front legs’ joints and chest are discolored, which tells she had to spend a long time on the hard floor. 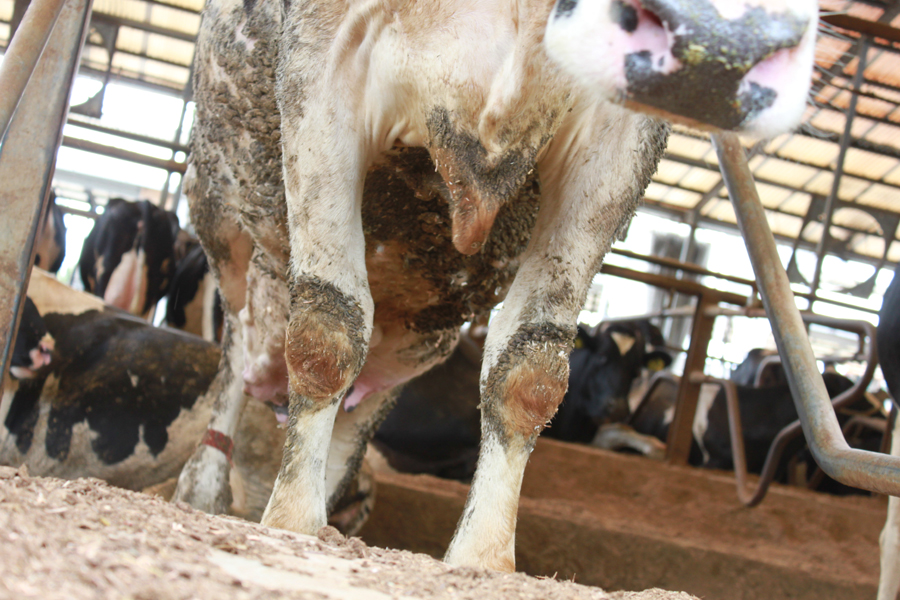 She had to wait for a day at a slaughterhouse, but there was drinking water available.

However, she probably died while bearing pain as she was not milked at the facility.

This is a male cow raised for Wagyu beef.

He was about 4 months old in the picture. He was raised in a tiny container for 4 months.

He was moved across 4 farmers in 2 prefectures. He was killed at the age of 2 years and 3 months old.

He was slaughtered in summer so he must have died in excessive thirst. 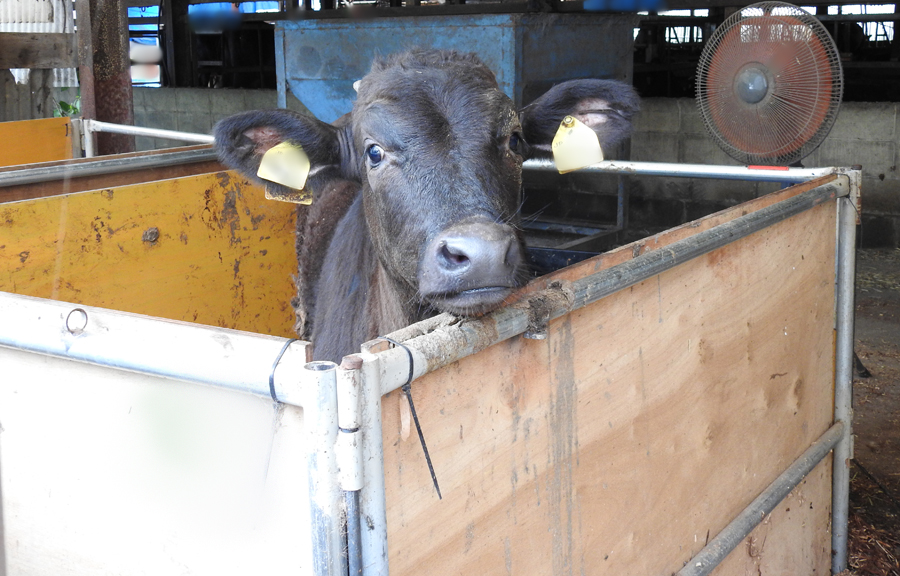 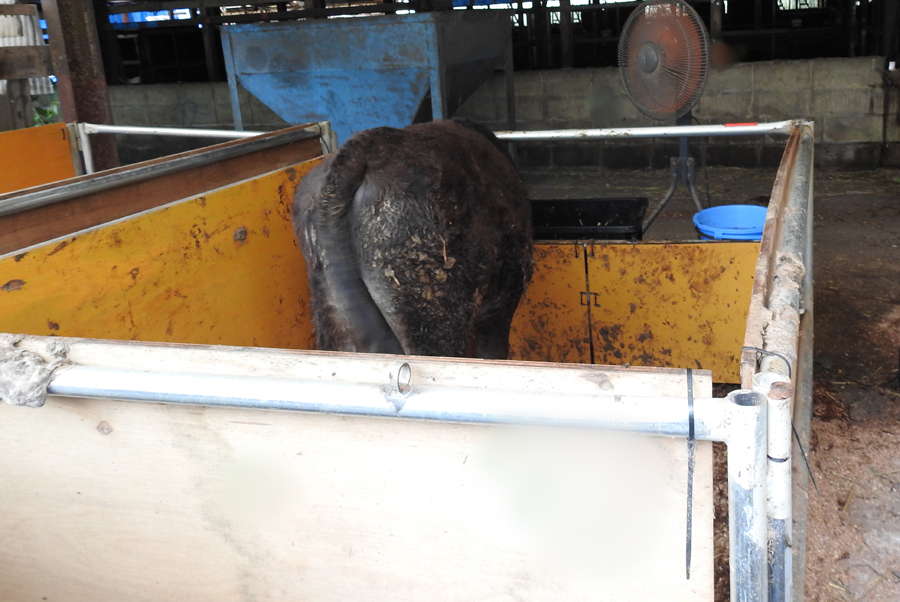 This cow is also a male cow raised for Wagyu beef. 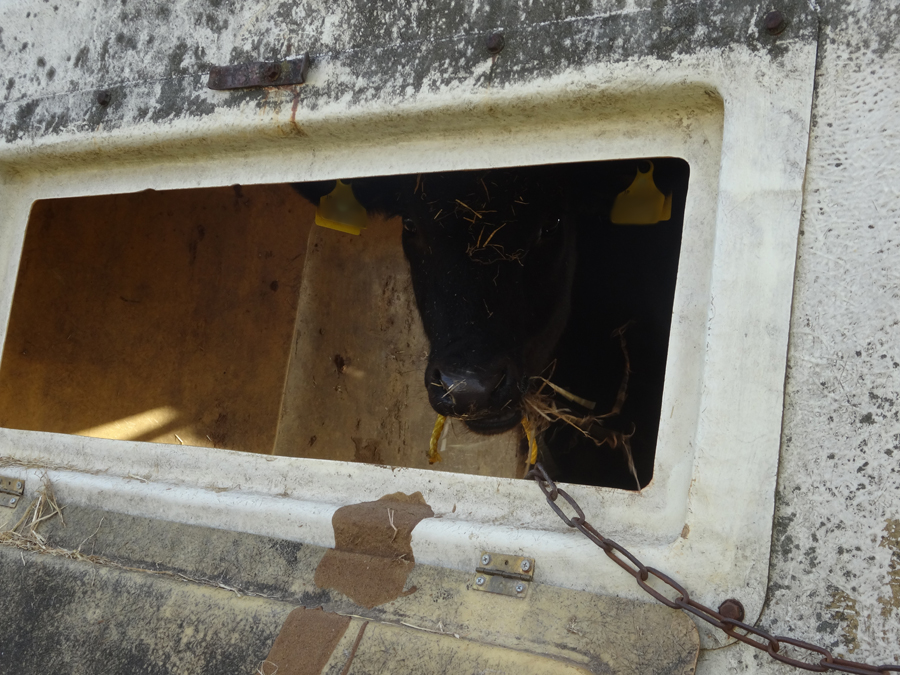 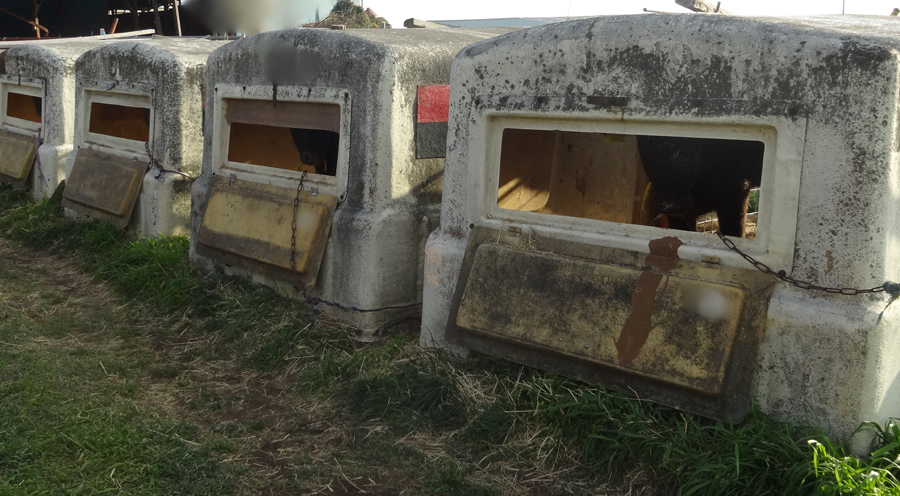 He was raised for 4 months in the same farm he was born, then got auctioned and was moved to a second farm in the same prefecture.

He was about 5 months old at the second farm in the picture.

After spending 4 months there, he was moved to a third farm, which was 500 km away, so it took about 6 hours.

The third farm didn’t have containers, so he got to spend time with other cows in a house.

He was raised for about 1 year and 7 months there, then got slaughtered at the age of 2 years and 3 months.

He was slaughtered the day he arrived in the slaughterhouse. The facility provided water.

His agony was somewhat lessened that way.