Japanese eggs that got banned in Taiwan

In 2018, due to oversupply of eggs, the price fell and the adult chicken renewal and empty shack extension project was launched, and millions of egg-laying chickens were slaughtered (details here). Egg prices are so low that they have fallen to the lowest level in the last 10 years, and production is said to be excessive *1.
Wondering what happens to the extra eggs, the following article was published in the April issue of the Japan Chicken Industry News *2 with the title “Japanese eggs exceed Taiwan’s pesticide residue standard tolerance”.

Chicken eggs exported from Japan in February were suspended from import because they exceeded the standard value in the pesticide residue inspection conducted by Taiwan.
The pesticide of interest is Spinosad, which is used in Japan as an anti-prickworm repellent. Although the detection value was 0.14 ppm, and clears the Japanese standard value of 0.5 ppm, it does not clear the residual pesticide standards of the exported countries (Taiwan 0.05, Hong Kong 0.01).


The extra eggs were probably exported to Taiwan as a destination.
The first surprising thing from reading this article was that Japan is 10 times more lenient than Taiwan in terms of the residual levels of Spinosad for red mite removal.  We hear that “Japanese eggs are safe enough to be eaten raw,” but when we see these numbers we must question.
It is often argued that Japan has low pesticide residue standards, but let’s leave those arguments alone for now and focus on the red mites, which become particularly active from this rainy season of high temperature and humidity.

Red mites are a type of ectoparasite that infest chickens and suck blood, and with changes in the rearing environment, in recent years their habitat has expanded, and are invading (parasitically) throughout the country apparently.
Multiple surveys have been conducted on the prevalence of red mites among egg-laying chickens, and a survey of 437 egg farms in 2007 reported 85.2% at egg-collecting farms, 55.1% at hen-raising farms, and 56.3% at hatching farms *3. Also, a survey of 616 egg-laying chicken farms in 2009 showed a result of 60% (egg-collecting, hen-raising, and hatching combined) *4.
In Nagasaki prefecture, infiltration of red mites was confirmed at 67.6% of egg-laying chicken farms, and there was also a report that severe contamination was observed in 23.5% of the farms (reported in 2014. 34 farms surveyed *5).  A survey of 24 chicken farms in Osaka (egg-laying or broiler indistinguishable) even showed as much as 90% red mite prevalence *6.
There are many other reports, but as far as we see, we think it can be said that at least half of the egg-laying chickens are infested with red mites. Actually, maybe even more. This is because, due to the introduction of many drugs for prevention of red mites, drug-resistant mites have emerged in recent years *7.

What are Red Mites 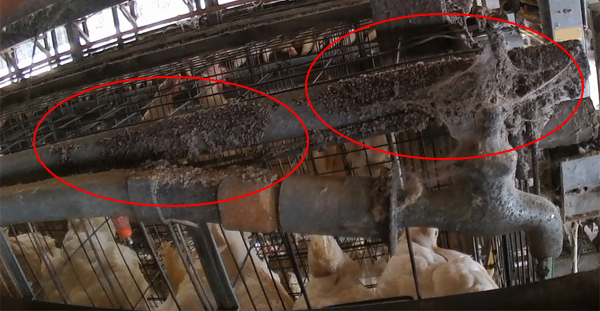 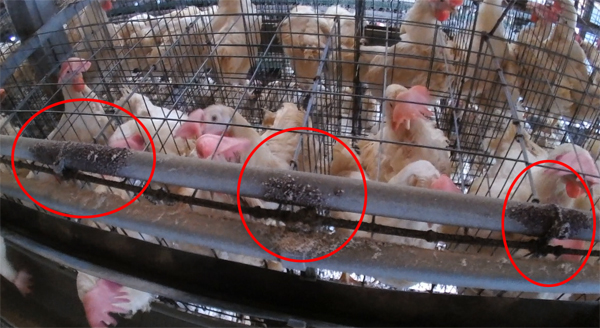 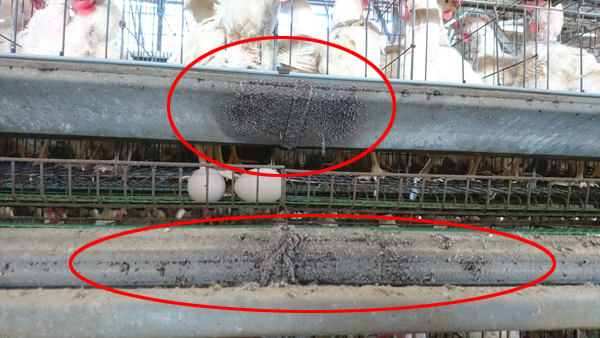 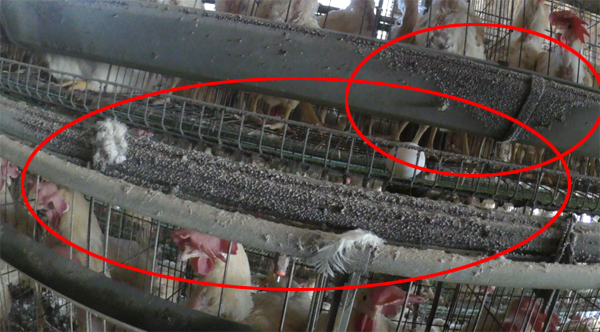 In the video, you can see that the mites are gathered in a black spots.

Although application of diatomaceous soil or silica that controls the movement of red mites may be used in combination, the basic method is drug dispersion.
In addition to the pesticide Spinosad (product name “Econosad”) that has become a problem in Taiwan, various drugs such as Neghon, Volho, ETB, Varizon, Gosh are used for the control of red mites.
Multiple drugs are used in one farm because 100% lethal effects are not obtained with a single agent, or long-term continuous use of the same drug leads to drug resistance. However it’s not easy to get rid of red mites completely.
Even if they seem to have been temporarily reduced by drug spraying, the mites are lurking in the gaps around the chicken shack, and they come out again and spread in mass quantities. Considering that they can survive for 9 months even without blood feeding and that they start laying eggs 9 days after birth, it’s probably safe to say that complete cleansing of a poultry shack is almost impossible. Red mites are not a problem only within poultry shacks, but they can also enter the farm from the outside.

Red mites move from farm to farm along with various objects such as humans, chickens and vehicles, as well as transport baskets and transport containers for eggs.  Also, it has been pointed out that wild birds may also carry red mites. Furthermore, they move via rats and flies, etc.
Once established in a farm, complete removal becomes extremely difficult.  Therefore, it is most important to not let red mites invade the farm.
(Cited from the 2011 Japan Poultry Association egg-layer red mite mitigation manual *4)


The drugs are sprayed about once a month, and they fall down on chickens unforgivingly.  There are chickens who get soaked and become weak.

Harm to the chickens

Contamination by the red mites causes the chicken farmers to suffer due to the occurrence of blood-tainted eggs from squished mites, decrease in egg-laying rate, and deaths of chickens.  But the biggest victims are the chickens.
Bitten chickens suffer from itching, feather loss at the bites, dermatitis with itchiness, anemia, and stress.  They can even die from anemia.  This is because, although the amount of blood drawn per mite is very small, hundreds and thousands of mites feed on the small chickens every day in heavily contaminated farms.  Red mites sometimes concentrate on chickens with higher body temperatures, and the pain of the bitten chickens is beyond imagination.
Especially in Japan, almost 100% of chickens are caged.
In cages they can not move around to get rid of the mites, nor can they bathe in sand.  Chickens usually bathe in sand to remove parasites like mites and dirt from the skin and feathers, keeping the body and feathers clean. However, neither the choice to escape nor the option to bathe in the sand is allowed for the chickens. Chickens housed in caged farms contaminated with mites are miserable.
Cage-free rearing doesn’t mean that chickens will not get bitten by the mites.  Red mites appear equally even in case of cage-free. As a result of surveying 616 farms in 2009, the incidence rate of red mites was measured in the following order from highest to lowest: free-range, semi-windowless, cage-free, and windowless *4.
However, there is a big difference between being confined in cages and having to bear mite bites and being able to choose to reduce bites by escaping from the mites.

When blood is sucked by the red mites, they get anemic and the chicken crowns become white as shown in the picture.  They die if it becomes severe.

What to consider before buying eggs

The animals laying eggs are the chickens. It is necessary to consider in all circumstances what kind of situation the animals with emotions are reared.
What torment chickens are not only the mites but also endless number of things:  caged rearing、lack of sand pit / perch branch / nest、overcrowding、beak cutting、forced feather change、weed-out method of the weak、rough handling for delivery、transportation stress、prolonged abandonment at slaughterhouses、slaughter without stunning、slaughter of newly born males.

If you eat eggs, you should evaluate these all from an animal welfare point of view and choose the less pain-inflicting ones. However, whatever welfare rearing it is, they are treated as economic animals in the end, and it’s the same when they are killed after no longer being able to produce profit from the chickens.
Please consider the best option of “not eating eggs” as an option.

Hope to the suffering animals. We marched for the farmed animals.