World’s 2nd largest meat producer Tyson Foods announced that it will debut their own plant-based protein alternatives this summer.  Tyson Foods had previously invested in the plant-based meat company Beyond Meat, but in April this year Tyson sold its stake, intending to produce its own alternative products.  According to research, the US meat-substitute retail market could reach $2.5 billion by 2023. (*1)

Many other companies are engaged in this space, especially in Europe and North America.

Canada’s largest meat product manufacturer Maple Leaf Foods bought the well-known plant-based brands Lightlife and Field Roast in 2017, and in October 2018 established a new plant-based food branch Greanleaf Foods (*2).  In April this year, Maple Leaf announced that it will construct the largest meat alternative manufacturing plant in North America for US$310 million (*3).  It is expected to be completed by the end of 2020 in Indiana, USA.  Israel’s largest meat producer Soglowek has since 1987 produced meat alternatives under the label Zoglo’s.  As of now, non-vegan products contain some dried egg whites unfortunately.  In 2018, Soglowek announced donating 20% of the profit from Zoglo’s to the Israeli clean-meat startup SuperMeat (*4).

In Europe as well, many meat companies from the giants to relatively small ones have hands on production and sales of plant-based meats.  PHW Gruppe, the largest poultry processor in Europe, sells plant-based sausages and schnitzels under the sub-company Wiesenhof.  This German corporation established a new department for plant-based protein in 2018, and has since invested in aforementioned SuperMeat and partnered with Beyond Meat (*5).

Already, half of the numerous German meat companies are producing alternative proteins (*5).  Recker Convenience in 2013 founded the LikeMeat company, which is now under the meat giant Heristo since 2016, sells various vegan meat substitutes (*6).  Rügenwälder Mühle has sold plant-based ham, sausages, and meatballs since 2014, and as much as 30% of its €210 revenue in 2018 came from its plant-based portfolio (*7).  Vossko offers, in addition to prepared meat alternatives for the consumers, six varieties of plain soy meat for industry buyers in 10-kg units.  In addition, other smaller German meat companies including Meica, Windau, Seiber, Ponnath, Rasting, and Gutfried offers plant-based meats.

In the Netherlands, the major meat company Enkco has offered a variety of alternative meats containing vitamin B12, under the brand name Vivera.  Other than the 100% plant-based products, many still uses egg protein.  Switzerland’s leading meat manufacturer Orior has also engaged in many vegetarian and vegan meat products for over 20 years.  In addition, meat companies in other European countries offer products that can take place of meat (see table below).


Finally, the other meat processing giant in the US, Hormel Foods, has recently indicated interest in entering this plant-based market (*8).

Realistically, through these trends the animal sacrifice will decrease and the society will evolve from being meat-based to plant-based.

2019/6/30 Update:
A Japanese meat company Marudai Shokuhin had released a product called “soy hamburg like meat” under the series “Gochi-Soy” back in August 2018 *9.  In spring 2019, it released a keema curry and a mapo tofu sauce made of soy meat under the brand “Soy Life”.  They do contain dairy products. 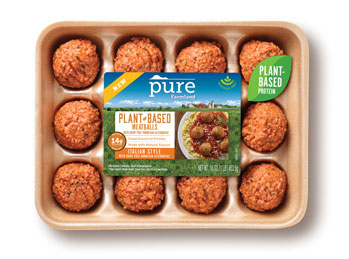