What does “vegan” actually mean?

ホーム » What does “vegan” actually mean?

The word “vegan” seems to appear more and more recently even in Japan, but what does “vegan” really mean?  Many people seem to misunderstand, so it would be good to understand its real meaning as this word becomes more commonly used.

Indeed, if you check on Google Trends, the search interests in both “ヴィーガン” and “ビーガン” seem to be increasing exponentially *1.

The word “vegan” was originally invented in England.  In Japanese, many people write “ビーガン”, but “ヴィーガン” is technically more correct, if you want to be exact.  (In Google search, too, “ヴィーガン” has twice as many results as “ビーガン”, so it might be good to try for consistency.)

History of the word “vegan”

The very first use was in 1944 in England, where the word “vegan” was proposed in the 1st issue of the newsletter for a new group who rejected not only animal flesh and eggs, but now also dairy *2.   The proposer took the first 3 letters and the last 2 letters of “vegetarian”, somewhat implying the end and a new beginning of vegetarianism. 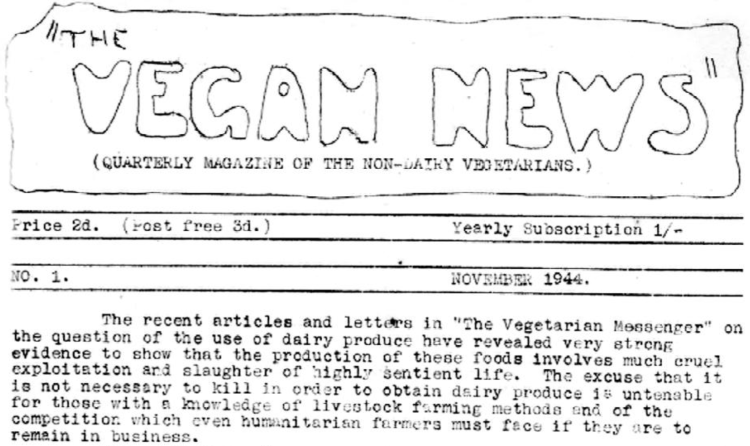 (Within this newsletter, the author also points out the virtue of a relatively short word “vegan” compared to “vegetarian”, for someone who must write it thousands of times a year.) 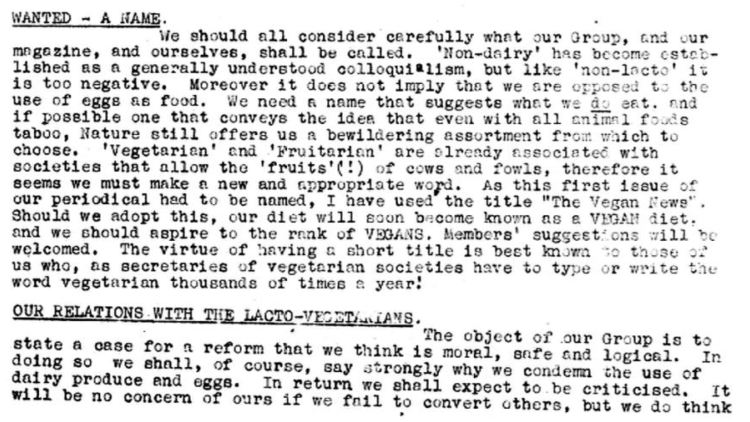 “the doctrine that man should live without exploiting animals”

Exploitation means using others selfishly or unfairly.  The Vegan Society pledged to ‘seek to end the use of animals by man for food, commodities, work, hunting, vivisection and all other uses involving exploitation of animal life by man“.  It also stated that the members (basically “vegans”) are “all who wish to see the object achieved and who undertake to live as closely to the ideal as personal circumstances permit“.

This is the definition of “vegan”, but isn’t the main point different from the impression that many people have?  The main point is respect for animals’ lives, and to not exploit them.

Not just a strict plant-based diet?

Many often think that veganism is just strict vegetarianism.  Many might have impressions such as:

They don’t eat the usual food for some reason and just eat vegetables, maybe for health.

They can’t eat yakiniku, sushi, omelettes, or ice cream, missing out on half the life’s pleasures.

Also, there are people who say “I’m trying out vegan for my health” or “I’m vegan for the environment”.  However, if such people were buying meat for others, buying fur/leather products, or were paying to go to zoos, can that be called “vegan”?  Looking at the above definition, you should see that it contradicts the true meaning of “vegan”.

Many people tend to think veganism is about food, but in fact it’s about animals: specifically how we should co-exist in harmony with other animal lives.  In a world where animals are being exploited by humans in a variety of ways, what’s involving the greatest number of victims by far happens to be the animals used for food.  Every year, at least 300,000,000,000 individuals are being sacrificed after surffering in animal farming *4*5.  This is indeed more than 40 times the world’s human population… every year.  If we include all the fish caught from nature, this number becomes over 1,000,000,000,000 individuals every year *4.  Can you imagine this?  Every second over 30,000 individuals are getting their freedom taken and killed by humans.  And this is despite the fact that humans, without useful canine teeth like carnivores and with long intestines like herbivores, have no need to eat animal products.  When one finds out the reality hidden by the animal agriculture industry, it becomes difficult to believe we used to think that what involves such torture of animals was a pleasure of life.

People who are vegan are often asked questions like “you can’t eat this?”.  However, it’s not really that they “can’t eat” animal products, but more accurately they “do not eat” by choice, if one considers the meaning of being “vegan”.  Or, even if they’re physically capable of eating it, because of the sheer cruelty involved perhaps some people “can’t eat” psychologically or “can’t support” it.

It’s fortunate, and actually natural when we think about it, that plant-based diet is good for our health, but that is simply a benefit of plant-based diet, and has no direct relation to the concept of being “vegan”.  If you are already practicing, or interested in, plant-based diet for health and the environment, why not take this opportunity to try reflecting on the original meaning and intention of the word “vegan”?  Even if you are not interested as such currently, by understanding the meaning of “vegan”, you should see that it’s not some blind belief or religion but something based on ethics and respect for another.

Not required to be a perfect vegan??

Another often misunderstood impression is that veganism is perfectionist and not accessible to normal people.  Or, some people say things like, even though they’re supposed to be perfectionists, they step on ants, they’re not working on human rights, they’re killing plants, etc.  Even some vegans say there’s no such thing as 99% vegan; you’re either vegan or you’re not.

As indicated in the 1951 statement by the Vegan Society above:

all “who undertake to live as closely to the ideal as personal circumstances permit”,

perfection is not required because there’s no such thing.  In Japan’s society today, it’s basically impossible to separate ourselves 100% from some form of animal exploitation; and that is not the point.

If people don’t dwell too much on being perfect, more people would probably be able to identify with being vegan and more animals would be saved from lifetimes of suffering.  When the 1 trillion+ victims a year is averaged per person, it equates to over 1500 precious lives suffering to death for every 10 years that a person eats an average diet.  (In reality, the number of victims must be even greater in relatively wealthy countries like Japan.)  Looking at this another way, if an elderly person with 10 more years to live stops eating animal products, lives of over 1500 individuals will be spared.  If you are in your 20s for example, with your choice, you have the potential to spare over 10,000 individuals from suffering and sacrifice during the rest of your life.  This is because demand and supply are tightly coupled, and if we decrease demand, the number of animals bred to be exploited and fish caught will necessarily decrease.  If you imagine putting yourself in the place of each individual animal who is treated as a slave, you’ll probably see that giving up altogether because you can’t be a perfect vegan is out of the question.

Vegan not for ourselves?

In addition to benefits to our physical health or looks, many people practice plant-based diet for spiritual health or growth, for meditation, for world peace, etc.  These are great in their own ways, but calling these motivations “vegan” is technically not accurate, and might be leading to misunderstanding of the original intention.  Being vegan is not about benefits to ourselves, but it’s a choice in consideration of other animal lives who tend to get most exploited.  Of course, if we are able to respect and have compassion for even those who would provide no benefits to us, naturally that would be good for our spiritual health and help us deal with one another more peacefully.

This article is not intended at all to be nit-picky about the definition of the word “vegan”, but the hope is that it informs or reminds people about the most selfless and beautiful true concept behind this commonly-misunderstood word.  Even if you had been using it incorrectly, let this not discourage you from continuing to use it; rather, let this be an opportunity to aspire to expand our circle of compassion and basic respect beyond the human race and beyond those species that we can relate to.