The fraction of supermarkets carrying cage-free eggs increased to 51%.

Animal Rights Center Japan, with support from 77 volunteers in 24 prefectures nationwide from August 1 to September 31, 2019, surveyed 270 stores for animal welfare and plant-based protein availability.  In the “Green Consumer Nationwide Store Survey 2015” sponsored by the nonprofit Citizens Environmental Foundation and participated by multiple organizations including the Animal Rights Center in 2015, 22% of the supermarkets sold eggs that were labeled cage-free or free-range, and 16% of supermarkets sold milk labeled “free range” or “grazing”.  In 2019, the concept of animal welfare seems to have spread a lot, but whether it is actually reflected in the shops is the issue that will lead to changes in the form of production in the future. 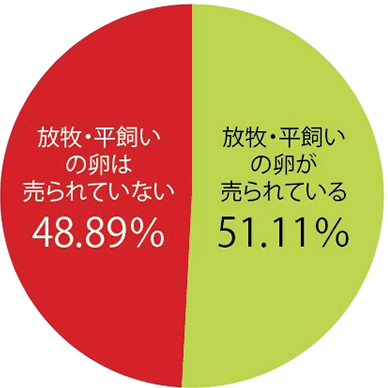 Why we demand cage-free eggs

In nature, chickens peck at the ground more than 10,000 times a day, sleep on perches, lay eggs in nests, remove parasites and dirt by sand bathing, sunbathe, exercise and maintain physical and mental health.  However, 92% of Japanese egg farms now rear chickens confined in battery cages that restrict almost all movement.  Chicken bones are 1/3 thinner compared to free-range, and pesticides are applied throughout the body to remove parasites.  It is clear that cage rearing has significantly lower animal welfare.

The world, including Asian countries such as Thailand, Taiwan, and South Korea, for reasons of caged rearing being cruel, harsh, and unhealthy for the chickens, and for food safety, are moving toward cage-free or free-range eggs.

Even in Japan, Starbucks, Costco, Unilever, etc. have moved to cage-free, but it can be said that domestic companies have little movement and are behind the world.

Only 8.9% of supermarkets carry free-range milk, down from 16% at the time of the 2015 survey.  Many of them were placed in high-end supermarkets.

Why we demand free-range milk

73% of dairy farms in Japan restrain cows with short chains, ropes, or stanchions.  This tethered rearing is a method that drive cows to limits in both mind and health, and is a rearing method with very low animal welfare that is common in Japan but rarely seen overseas.  Currently in Japan, if consumers want milk from free-range or milk without constrictive rearing, buying such is not easy.  Even if there are grazing farmers or farmers who rears cows without restraint, milk is all combined at the time of collection and cannot be selected by consumers.

* In addition to eggs and milk, we also surveyed the state of animal welfare in the meat department, the clear outcome being that animal welfare-friendly meat is hardly sold, but we will refrain from publishing this. This is because, while it seemed that some free-range chickens were sold, there were many people who mistakenly recognized mere branded chickens as free-range, leading to a conclusion that it cannot be said to be a significant result.