[Cage-Free Declaration] A path opened by one owner’s life

The vegetable garden Chiisanate, run by Mr. Yoshiki Takashiro, a unique owner who has studied technical agriculture, worked at a food company, and has the experience of joining the Ministry of Agriculture, Forestry and Fisheries (MAFF), has made a cage-free declaration.

When he first got a job at a food company, he was so shocked by the amount of additives used in products that he was overwhelmed by the negative impact on society and he couldn’t like his job.

Then, wanting to work for people for the world he re-studied agriculture, and happily joined MAFF, but Mr. Takashiro’s job there was to invest in public works to realize “profitable agriculture”, and the days were spent pursuing only efficiency, improving productivity and reducing labor hours.

Mr. Takashiro’s ideal about farming was a simple, self-sufficient lifestyle that he experienced at his grandmother’s house, so he is particular about safe agricultural products.  Also from receiving a child, his feelings for slow life strengthened, and finally he left MAFF, and at age 36 he opened the long-cherished vegetable garden Chiisanate.

As the name suggests, Chiisanate (a small hand) is a small organic restaurant.  Thanks to the conflicts with food that he faced while struggling during his youth, and the resulting placement of importance on selection of ingredients for safety and no additives, a menu that naturally incorporates animal welfare has been realized.  He also positively welcomes public communications from the Animal Rights Center Japan.

The fact that this owner who has lived a life somewhat far from animal rights and animal welfare that we pursue is currently walking in the same direction… we feel this is a result of not only the owner’s own qualities, but also a shift in values ​to an era in which the essence of food is sought.

Chiisanate is an unusual restaurant, and has acquired organic JAS certification for agricultural products and also produces organic vegetables based on the JAS regulations.  And the good news about eggs is that they are rarely used on the menu and are only provided to those who request them.  The owner himself thinks that eating eggs is not good for his family, so he aims to be egg-free as much as possible and chooses cage-free eggs to sell in small quantities.

* The restaurant has vegan options. 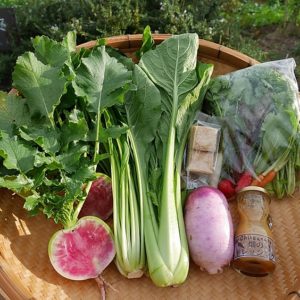 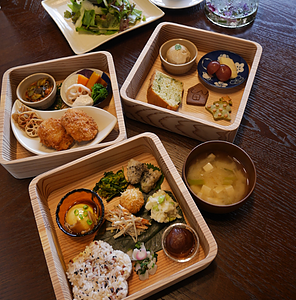 Effects of the Novel Coronavirus on World's Animal Agriculture: Part 1