Eggs are unhealthy: why we shouldn’t eat them even though they’re cheap

ホーム » Eggs are unhealthy: why we shouldn’t eat them even though they’re cheap

Chicken eggs, which sometimes only cost about 10 yen (~0.10 USD/EUR) each, are often said to be nutritious… but should we really be eating them?

The average person in Japan consumes as many as 337 eggs per year — the 2nd highest in the world (as of 2018) *1.  Some may feel that we’re not eating nearly one egg a day, but eggs turn out to be in many products when you look at the ingredients list, like in baked goods and mayonnaise.

The ‘raw’ truth in Japan

Generally, the primary concern with eating raw eggs is salmonella contamination that causes food poisoning.   In Japan, most eggs are thoroughly cleansed before being packaged and given a relatively short shelf life of 2 weeks.  This is supposed to mitigate the possibility of contamination.

However, when eggs are washed, the cuticle which is the protective coating gets washed away, and this actually makes it easier for bacteria to penetrate.  So, washed eggs (like most eggs sold in Japan) should really be handled with extra care as they are potentially more susceptible to contamination.  It’s safest to just avoid them altogether.

Salmonella contamination: 1 in every 400 eggs!

According to a survey by the Japan Ministry of Agriculture, Forestry, and Fishery, salmonella was found on the egg shells in 5 cartons of eggs out of 2000 on the market *2。  This means that 1 in every 400 eggs was contaminated with salmonella in Japan.

Wish washed eggs, the salmonella could pass through the shells and contaminate the insides as well.  Even if the salmonella doesn’t penetrate the egg itself, it could still wind up on your hands and be passed on to other foods or dishware.  This could ultimately lead to salmonella poisoning.  Among salmonella found inside the intestines of livestock animals including egg-laying hens, antibiotic-resistance of the bacteria is increasing, so the danger to humans is even higher *3. 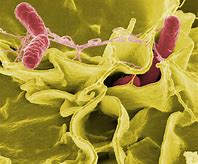 Pesticides like Neguvon that are illegal in many countries are still being used in poultry farms in Japan.  Many farmers spray the cages and the chickens with pesticides on a monthly basis in order to eliminate ectoparasites called the red mite.  The spraying contaminates the eggs that are laid there, remaining on the surface of the shells but also seeping through their microscopic pores.

Neguvon*4 is 97% trichlorfon, but because it’s very harmful to humans, trichlorfon has been banned since 1995 for food and feed use in the USA, and is completely banned in the EU, Brazil, New Zealand, Argentina, India, etc *5.  Another pesticide called Boruho*6 is also being used in Japan, but its main ingredient is propoxur, which is also banned in the EU*7, and classified in California as a chemical known to cause cancer *8.

Another chemical called spinosad hasn’t been banned in these countries, but in 2019 its residue concentration in eggs exported from Japan was detected to be too high for human consumption, which resulted in Taiwan deciding to stop importing those eggs.  The maximum residue limit for spinosad in most countries is 0.05 ppm or even lower (0.01 ppm in Hong Kong), but Japan allows as much as 10 times that (0.5 ppm) *9.  The limit used to be 0.05 ppm in Japan as well but that standard has been lowered over the last 10 years in contrast to the rest of the world *10.

Perhaps related to that, according to a 2015 paper published by Chiba Prefectural Livestock Research Center in the Journal of Japan Veterinary Medical Association, pesticides are becoming less effective in Japan:

“In recent years in Europe, pesticide use is becoming widely regulated, resulting in less reports of occurrence of red mites’ resistance against drugs.  However, in our country the occurrence of resistance against pesticides on the market has increased further in the period of 2007-2013, compared to results of a survey in 2003-2006, with the exception of dichlorvos” *11.

This likely indicates how much pesticides are being used in Japan compared to Europe.

Cholesterol: Eggs being healthy is a lie.

What about the nutritional value of eggs?  In Japan, egg marketers push the health benefits, but are they really good for our health?  The short answer is “no”.

First, 60% of the calorie from an egg is fat.
More importantly, the average egg sold in Japan contains as much as 250 mg of cholesterol *12.  With just a single egg, this exceeds the 200 mg daily limit as prescribed by the Ministry of Health, Labor, and Welfare in their publication of “Japanese Standards for Food Intake (2020)”.

Whether eggs are healthy or not is subject to varying and often contradicting research results.  On one hand, the connections between egg consumption and various diseases have been statistically proven, but on the other hand, some researchers claim that there is no conclusive evidence to suggest that such a relationship exists.  However, in the latter case, the research is often backed by the egg industry.

One fact that has become indisputable is that blood cholesterol levels and cardiovascular diseases (CVDs) are highly correlated.  CVDs result from clogged or ruptured arteries, as in the case of heart disease or cerebrovascular disease (stroke).  With one in four Japanese people dying of CVDs *14, they are the 2nd most common cause of death in Japan (cancer is number one) *13.

According to research published in March 2019 that studied nearly 30,000 people for periods of 13-22 years, every 250 mg of daily cholesterol consumption (equivalent to every additional egg per day) resulted in 14±7% increase in the incidence of cardiovascular disease.  This result was statically significant even after adjusting for the effects of other factors including other nutrients, dietary habits, obesity, and smoking habits *15.

The same study also checked directly the relationship between egg consumption and CVD incidence, coming up with results consistent with the cholesterol content of eggs.  Basically, every additional egg consumed per day leads to average 14% increase in the probability of getting a cardiovascular disease.

The classic food item containing the most amount of cholesterol is egg.  However, there is a lot of statements on the internet, at least in Japan, that egg consumption is not related to cholesterol levels in blood.  The fact remains that there is not a single research publication to validate such a claim *13.

Getting back to the point about the egg industry sponsoring research related to egg consumption and cholesterol, researchers began receiving industry funding in the 1970s.  Such funding has been increasing steadily, and, as of the 2010s, was supporting 60% of the published articles on this subject *16.

In about 90% of papers published about the relationship between egg consumption and cholesterol, egg ingestion was reported to increase cholesterol concentration in blood.  Despite that, 49% (29 papers) of industry-funded research stated that net cholesterol increases were favorable in their conclusions *16.  A major source of funding, for example, is the American Egg Board who states that its “funds directly support the research, education and promotion necessary to market eggs” *17.  The conclusion here is that even papers that are published in scientific journals must be interpreted with much caution.

Eggs do contain an abundance of protein and vitamins — after all, eggs have all the nutrients necessary to create a baby chick.  However there’s absolutely no need to eat them at the expense of ingesting a lot of cholesterol whose harm to humans have been proven.  We humans can get the same nutrients from beans, grains, vegetables, without any cholesterol at all.

Perhaps it’s no surprise that the second most common cause of death in Japan is cardiovascular disease.  After all, Japanese people are the world’s second-highest consumers of eggs on average.

Eggs are related to cancer, too.

Okay, so what about the number one cause of death in Japan: cancer?

The most common form of cancer in Japan is colorectal cancer*18.  According to research that analyzed data from 34 countries, egg consumption is significantly and positively correlated with mortality from colon and rectal cancers *19.

Eggs are by far the most common food allergen among children under 3 years old in Japan: of those in Tokyo Prefecture who experienced food allergy (21% of the total), about 80% had allergy from eggs *21.  In other words, one in every six 3-year-olds in the Tokyo Prefecture have an egg allergy.  Maybe eggs just aren’t suitable for humans to eat.

Even if you are not concerned with the health aspects, think of this: egg consumption represents a lifetime of suffering for hens who are sentient beings just like you and me.  For over 99% of the eggs in Japan, each egg is 24 hours of suffering of a hen trapped inside a cage.
The choice is within each of us to put an end to this cruelty.

So whether it’s for your health or for the chickens, or both, we shouldn’t be eating eggs — even if they are cheap.