ホーム » Starvation is an Ultimate Form of Animal Abuse

Say NO to Practice of Starving Animal to Death in Industry

A broiler chicken company in Wakayama prefecture reportedly starved 140,000 chickens to death in 2020. The company belonged to the Arita Poultry Agricultural Cooperative.

According to Wakayama prefecture, a chicken slaughterhouse owned by the same owner of this broiler chicken company went bankrupt first, which resulted in the inability to relocate the chickens , then starvation. They claimed they could not afford putting these chickens down, either. The prefecture didn’t step in to help euthanize the birds, either.

And yet, the prefecture promptly executed an aid to clean up the corpses that cost approximately 100 million JPY, and handed it down to the owner.

The owner and the prefecture let chickens suffer, and ignored the value of the animals’ lives. They decided they must act quickly to dispose the corpses and yet they didn’t pay attention while the chickens were slowly starving to death. Their morality is truly questionable.

The police had started their own investigation before we reported the situation to them so we didn’t make an official complaint. We hope the police will continue to rigorously investigate the case, and pursue appropriate action.

More importantly, the current agricultural system must be fundamentally changed, or the same incident will happen again. We need to raise awareness.

What happened to the chickens?

What happened to the birds whose food and water supply was cut off from December 2019 to February 2020?

The birds were broiler chickens, which means they’re for meat. They were all babies.

Broiler chickens usually spend about 50 days surrounded by their feces and urine. After that, they are put in containers to be transported to a slaughterhouse. Then, they get their necks cut while being hung upside down. If they become too weak during the process, they may get killed by cervical dislocation, if they are lucky. If not, they get weakened and weakened and slowly die being unfound.

This farm used to send their chickens off to slaughter at 53 to 55 days of age when they weighed 3kg.

The area held about 45.4kg of chickens per sq meter,*1 which is relatively spacious for a farm in Japan, but unbelievably small compared to the world’s standards.

These farms were located deep in a mountain. We have no idea how trucks were able to access them.

There may have been birds who died in the early stages

We are unclear about how soon birds died and how long they suffered.

We can only guess by observing the corpses. Some studies suggest what kind of suffering these birds had to go through as well.

All 140,000 birds were individually different in terms of personality and immunity. So their deaths must have varied depending on the individual.

Those who didn’t have strong immunity probably died because they got infected, which slowly killed them from inside.

Those birds didn’t die in a day or two, of course. A single day without food would not have killed birds.

Some birds suffered for a long time

See the picture below. You can see how much feces and urine piled up. This is incomparable to normal broiler cages. This indicates how long the birds must have survived. 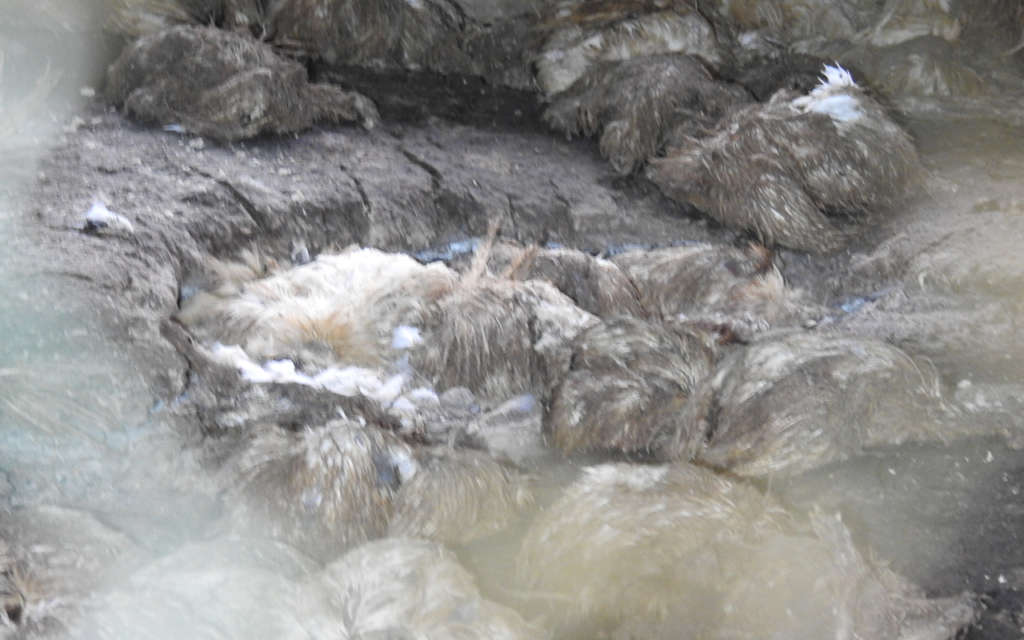 Dead broiler bodies turn black when being abandoned for a long time in the factory farming system.

See different degrees of  blackness in the image above.

This indicates some birds were able to die quickly while others suffered for a while.

We saw some bodies were half buried in urine and feces. Others were buried under another bird.

They slowly died one by one.

It also means some survived and were alive just before the picture was taken in February.

They were conceivably living for 50 to 60 days without food. That’s how long humans would survive.

It’s painful to imagine what would have happened to the bird who was still white in late February. The bird must have been just dead. It was probably the last survivor and the one that suffered the most.

Let us refer to an articles from the Doctors without Borders (Médecins Sans Frontières):

When not eating, we lose energy, which leads to extreme fatigue. We lose facial expressions and response. As little food goes into a stomach, it will shrink more, and then we can eat even less. Every system that is related to the stomach such as appetite and sense of fullness will malfunction. As we feel weaker, we can’t feel if it’s dry and if we’re thirsty, which leads to dehydration.

However, extreme fatigue won’t take away your sense of pain. With muscle atrophy, any movement hurts. Pain also comes with skin tissue being so dry it will break. Infection also causes pain. With extreme fatigue, we’re more susceptible to diseases. For instance, molds can grow in the digestive tract, which makes it difficult to swallow as it causes pain that’s similar to when we eat lemon with our mouth infected.

What happened to Infant birds*4

Once body fat is exhausted, it shifts to protein and glycogen to get nutrients, which shrinks muscles as a result. Around the same time, they become more susceptible to infections. When there is no protein in cells, muscles rapidly atrophy and many body functions will not work.

Broiler chickens tend to have weak bones. They were still babies so many must have been immobile because of muscle atrophy and fragile bones.

Potassium also gets depleted, so body fluids get stuck resulting in swelling and cardiac disturbance. The drop of heart rate and kidney failure will also contribute to heart failure.

Some may have been infected or had diarrhea when starving, which led to an increase of germs and toxins inside the intestine, then damaged intestinal mucosa. The intestine gets even weaker and dehydration gets worse.

When we have diarrhea, we suffer from stomach aches. Animals experience the same.

In addition to the weak body, they suffer from parasites sucking their blood.

Their body temperature also drops. It was the coldest part of winter from December to February.

During the cold months, they must have suffered from insomnia as their body temperature also dropped.

You must think their body is covered in feathers. However, broiler chickens are genetically modified in a way their body is larger with a high percentage of body fat and yet they don’t have enough feathers to cover the body. Also, they were babies so their belly skin was basically exposed.

Additionally, their feet and chests were all wet. There is no doubt they suffered from the cold.

Infections, immunodeficiency, or malfunctions of certain organs are the cause of death in these situations. The last phase of starvation is technically called marasmus, which is caused by extreme malnutrition and low energy. Their body mass is lost to maintain their lives, and then they get infectious diseases.

Another cause is called kwashiorkor caused by lack of protein, which leads to swelling and fatty liver disease. Then, many functions fail, electrolyte imbalance takes place. They convulse, then

Again, they were not numb to the pain, rather, they got more sensitive to it. They didn’t die of old age.

We don’t know what exactly happened to each individual bird. However, all 140,000 birds must have experienced and suffered some of the above.

Starvation is the most excruciating way to torture

Lethargy, unsteady, dried feathers, and loss of sense of fear will take place.*7

A study on healthy adults during a 10-day period of complete starvation also showed frequent lapses of memory, were not at all mentally alert, were slow to respond to questions, were tired, pale and haggard.

There were presumably about 3,000 birds in one chicken house. What were they thinking when they witnessed their friends dying?

Even 2~3 month-old baby chickens find each other company to follow their favorite ones and take a sand bath together.

They probably saw their loved ones slowly becoming immobile.

Some corpses had their organs exposed,  indicating they were cannibalizing each other. 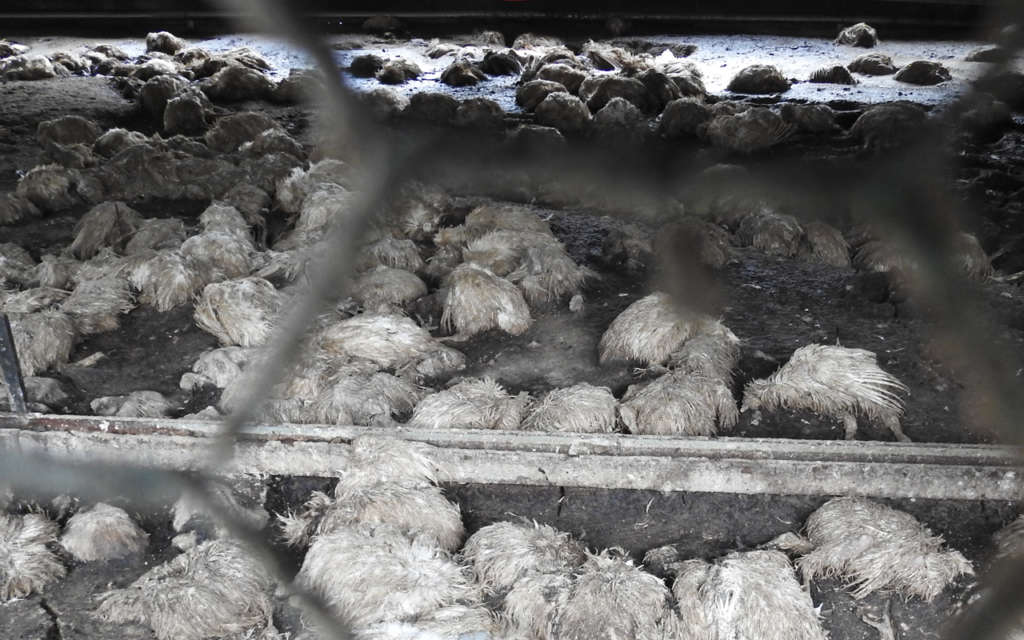 We should not think this is the same as fasting or wild animals that die of starvation.

These chickens didn’t have any place to run away. They had no way to find their way out to attempt to get food on their own. They were contained in a box without any food. There were no pain killers or hopes that they may eat in a few days.

We should acknowledge the fact these animals were kept by humans, and we chose a method to starve them to death. Their agony is unfathomable.

They could have been killed for mercy

We would like to point out that there could have been other routes.

The same person owned the Kibi Broiler Union, and Arita Broiler Agricultural Association. The facility was maintained by the same owner, as well.

So they could have predicted the slaughterhouse would be shut down. It would not have been difficult to guess they would run out of money for feed, human resources, or for euthanizing the birds.

And yet, Mr. Hiramatsu, who was the owner of these two entities, did not stop buying chicks.

The act was selfish and irresponsible for a person who keeps animals. The animals’ lives weren’t taken so seriously.

Staff members from the prefecture told us that “the animal welfare act can be pursued when they have money. It would be difficult to enforce the animal welfare law when operators had trouble feeding themselves.”

However, we argue the owner could have prevented these 140,000 birds from starving to death as he was managing the slaughterhouse and the sale of meat.

They could have killed the birds for mercy

They could have purchased CO2 gas to kill these birds before they went bankrupt when they realized the slaughterhouse and the farm could no longer be maintained. All they would have needed were garbage bags, buckets, and CO2 gas, which are not expensive.

Even if it had not been possible, they could have dislocated the birds’ necks, which is the usual method of killing. There were workers present until December. There were some workers there in January, too, who remained to volunteer to maintain the farm. Neck dislocation does not cost money.

It takes 3 workers to kill about 200 birds in an hour when farms are not able to ship birds for some reasons. *This method is not ideal but the period chickens have to suffer is much shorter. In the EU, it’s regulated that only 70 birds can be killed by cervical dislocation so CO2 gas is absolutely better.

Baby birds who were only 20 days old would have made euthanization much easier so we believe the situation where 140,000 birds were starved to death could have been avoided.

The issue of livestock industry as a whole

Having such a low animal welfare standard to make animals suffer this long, then starve to death should not be allowed.

Every single bird died in agony.

We often criticize how many dogs and cats are euthanized, but the number is fewer than 50,000.

We’d like to stress this is not the issue for the farmers.

Current practice in the livestock industry allows many farmers to leave their animals starve to death.

This practice is especially prevalent in the chicken industry.

Dozens of chickens die everyday or are subject to be culled. They may burn the animals, drown them, or throw them away as waste disposal.

There has been no progress or improvement made. That’s what the livestock industry looks like in Japan.

Consumers let the industry run this way by ignoring how animals are treated.

The industry won’t change unless ignorance does.

We should never forget 140,000 individual lives were lost behind the chicken industry. 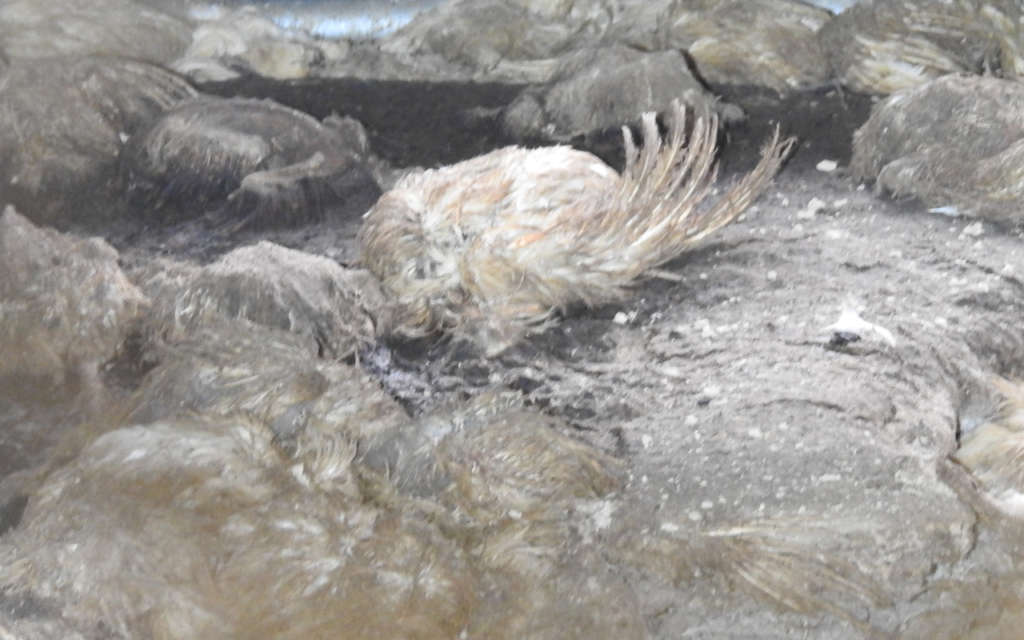 Long-Neglected "Honey" Dies: what caused this tragedy are those who paid for aquariums

Eggs are unhealthy: why we shouldn't eat them even though they're cheap