In response to an inquiry from Animal Rights Center Japan, Miyagi farm Co.,Ltd, in Nanjo city, Okinawa prefecture, who sells mayonnaise made of cage-free eggs, responded that all the eggs they use are already cage-free and that they would support the cage-free declaration.

They want to produce eggs that are different from others, and they think that the best rearing method is one that suits the mode of life , so this poultry farm takes the form of cage-free rearing in the winter and free range rearing in the summer.

A chick that was dying from overmedication stood up.

In 1980, I began poultry farming with my older brother. However, no sooner had we introduced 25,000 new chicks, when 100-200 of them died within a day. Upon investigating this, we discovered Escherichia coli and Staphylococcus aureus. At the time, I had just graduated with a major in animal feed, and all I knew how to do was to treat bacterial infections with medicine. So we used a disinfectant twice daily and antibiotics. After using the antibiotic for a week, the chicks stopped dying. But after about 3 years, the antibiotic lost its effectiveness. The next antibiotic lasted another 3 years, and the one after that only lasted a single year. The concentration of antibiotics in the chickens’ blood increased, and while it prevented infections, the chicks became sallow and weak. About 100-200 chicks became anemic and their bodies began to rot. Unable to treat all of them at once, we left them in the banana field overnight. Later, we noticed that chicks who didn’t last half a day in the cage were surviving in the fields. Without feed, medicine, or disinfection, these chicks were standing up and gaining vitality.

You can see how much healthier it is for chickens to be left free instead of being managed by humans in cages.

In Japan, over 90% of the farms uses battery cage rearing, confining chickens in cages.

It’s misleading to say that that’s healthy, and it’s definitely not natural. 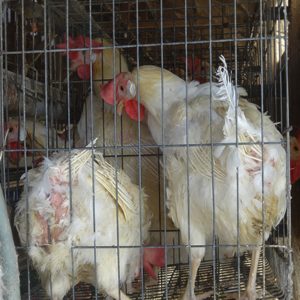 On the other hand, there do exist a few cage-free egg farms, which allow chickens to roam freely. 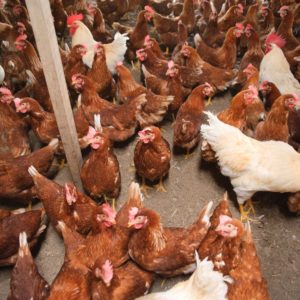 Caged rearing is being abolished all over the world, and Japan’s animal welfare is currently far behind.

A simple thing we can do to reduce the number of hens who continue getting exploited in their cages and go through life immobilized is for the consumers to stop buying cage-reared eggs and eliminate our egg consumption for the sake of the chickens.

People who become aware of the actual situations and make humane and ethical choices today are what will lead to a sustainable future.

Kokoron, a social welfare corporation that provides employment support for people with disabilities is cage-free